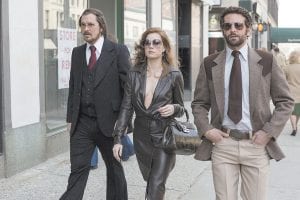 Underscoring deeply conflicted characters, who are on a mission to reconceive their unsatisfying circumstances, has become director David O. Russell’s sweet spot. From his raw 1996 film, “Flirting with Disaster,” to last year’s acclaimed “Silver Linings Playbook,” he effectively unravels the disarray.

In the 1970s-set con artist tale “American Hustle,” Russell’s ability to depict an audacious take on a bedlam breakdown peaks, making this his most entertaining jaunt yet.

Loosely chronicling the FBI investigation designed to implicate government officials by way of bribery known as the Abscam scandal, Russell inserts this disclaimer at the start: “Some of this actually happened.” The note sets the facetious tone for the corruption smear — six congressmen and a senator really went down — that riddled New York in the late ‘70s and early 1980s.

Russell, who co-wrote the script with Eric Singer (“The International”), could have devised an austere new-age noir. But he avoided the melodrama, instead heightening the ludicrous true-crime thread to an outrageously savage, comical and rapid degree. The result is a sleek revival of the ‘70s, complete with oversized glasses, plaid suit jackets, plunging come-hither necklines and a rapturous soundtrack.

Just about all of his characters are painstakingly obsessed with getting ahead. As a result, they cast morality and logic to the side at the expense of love, stability and a clean criminal record.

Some of the names from the real operation have been changed here, as Irving Rosenfeld, played by Christian Bale, is based on actual con artist Mel Weinberg, who was forced to conspire with the FBI to evade doing time.

The constantly effective Bale, as the bearded Irving, is a clever swindler who owns a slew of dry cleaners, sells both poached and fake art and hooks people into pseudo loan deals. But he’s not exclusively heartless. His conscience ensures he ideally wants a person to feel satisfied, which makes him quite lovable.

Sacrificing his usual sex appeal, Bale committed to packing on an extra 40 pounds and hiding a fake balding head with a hairpiece and a comb-over for this role. Still, his Irving is able to charm the smart and sassy former stripper Sydney Prosser (a memorably bold and genius Amy Adams) at a winter indoor-pool party by identifying their mutual love for Duke Ellington. Sydney, who is tired of slumming, pitches in on Irving’s crooking and assumes the perfect British blue blood persona for luring clientele into the loan scam. Before long, the two, who take turns narrating the story, fall madly in love.

But we soon find out Irving is married and stashes his lady Roselyn and her son on Long Island. His sultry and blunt companion, fiercely pronounced by Jennifer Lawrence, ensures she’s far from forgotten as she threatens to unmask Irving’s scheming if he utters the word divorce. The 23-year-old actress is the most irresistible part of this film, as she shifts between fiery and needy in an instant.

As Irving and Sydney’s plotting gains steam, they attract the interest of FBI agent Richie DiMaso (Bradley Cooper), who is thirsty for recognition and threatens a bust unless the couple goes in on a plan to nail politicians. But Richie, who lives with his mother and packs his head with rollers for that sexy curly look, falls victim to Sydney’s deceitful advances, as he certainly isn’t as clever as he thinks he is.

However, with themes of duality and skepticism running throughout, Sydney’s attraction toward Richie (who Cooper cleverly punches up in each scene), inevitably becomes real.

The film may lack grit but the stellar cast adds to its allure, helping to round out this dynamic account where reinvention offers the means to endure.

“American Hustle,” a Sony Pictures release that opens Friday, is rated R by the Motion Picture Association of America for “pervasive language including some sexual content and brief violence.” Running time: 137 minutes. Three and a half stars out of four.