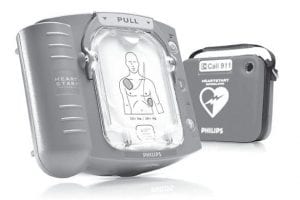 Having a defibrillator at home can help a heart attack survivor live through a second crisis, but so can CPR and at a much lower cost. Those are the findings from the first test of using these heart-shocking devices in the home. (AP)

Having a defibrillator at home can help a heart attack survivor live through a second crisis, but so can cardiopulmonary resuscitation and at a much lower cost. That’s the bottom line from the first test of using these heartshocking devices in the home.

The devices worked. But so few people in the study were stricken at home, and CPR by spouses in the comparison group was so good, that the 7,000-person study wound up being be too small to prove that a defibrillator can improve survival.

It did for South Carolinian James Kennedy. For three years, his family lugged one to the grocery store, to church and on trips. “Thank God we had it” last August, when his daughter used it to save his life at home, said Kennedy’s wife, Debra.

Others also benefited – seven friends and neighbors of people in the study. They got a lifesaving heart shock, too.

“There’s no downside” to having a home defibrillator, said study leader Dr. Gust Bardy of the Seattle Institute for Cardiac Research.

However, they cost $1,000 or more. And others say health dollars are better spent boosting CPR training. Arguments to expand access to defibrillators “have an emotional quality” not justified by cost and success rates, said Dr. David Callans of the University of Pennsylvania.

He wrote an editorial that the New England Journal of Medicine published on the Internet along with the study. Results also were given last week at an American College of Cardiology conference in Chicago.

They come a day after the American Heart Association changed guidelines to recommend hands-only CPR – pressing vigorously on a victim’s chest until help arrives.

Cardiac arrest happens when the heart beats chaotically. Automated external defibrillators, or AEDs, can shock it back into normal rhythm, and have been successfully used by bystanders in airports, casinos and other public places.

However, three-fourths of the 166,000 cardiac arrests that occur outside hospitals each year happen at home, and only 2 percent of victims survive. One home defibrillator, made by a Seattle-based division of Philips Healthcare, weighs less than 4 pounds and is sold on the Internet for as little as $1,200.

Researchers tested them in 7,000 people in the United States, Canada, Australia, England, Germany, the Netherlands and New Zealand. About half were given a device and a spouse or companion was trained to use it, then told to call emergency medical services. For the others, family members were trained in CPR and told to call EMS.

Over about three years, 450 people died, but only 160 were from cardiac arrest. Of those, only 58 were at home and suffered the attack in front of someone.

Defibrillators were used in 32 cases – all of them appropriately. The overall survival in both groups was comparable and far better than researchers expected.

“We did have some people that simply panicked and didn’t know what to do,” he said.

Dr. Elizabeth Nabel, director of the National Heart, Lung and Blood Institute, said the study “does not invalidate the use of AEDs by any means.” They “absolutely” are a good idea for diabetics, she said. That was the only subgroup in the study that had significantly better survival from the defibrillators.

Nabel’s federal agency paid most of the study’s cost. Philips and Laerdal Medical, a subsidiary in England, provided defibrillators and CPR training mannequins.

The study showed the devices “delivered the shock that was needed, when it was needed,” said Mike Miller, head of Philips’ defibrillator business.

Whether to buy one is “a personal choice” like having a sprinkler system, a smoke detector or other safety equipment, he said.

The study shows the value of defibrillators and CPR, said Mary Fran Hazinksi, a Vanderbilt University nurse and American Heart Association spokeswoman who has served on emergency care guideline panels. The association has targeted schools for expanding CPR training.

“We think that if we train all high school students, within a few years we will have a whole generation ready, willing and able to respond,” she said.