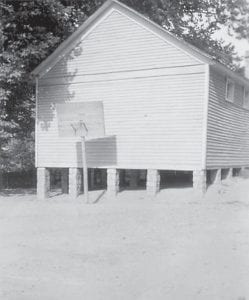 The Blair Branch Grade School was built near the community of Jeremiah in Letcher County by the Works Progress Administration (WPA) in 1936. (Photo courtesy Goodman-Paxton Photographic Collection/UK Library)

I’m not absolutely sure what’s causing it, but I suspect that a substantial number of factors have combined to bring on global warming. But I am sure that it’s happening and that the potential impact on earth, as we know it, will be devastating.

I don’t pretend to be a scientist, but I know for sure that Kentucky winters are a lot warmer now than they were when I was a schoolboy in the Fifties and early Sixties. We simply didn’t have weeks of January weather with daily high temperatures approaching 70 degrees when I was growing up on Blair Branch. If the temperature got above 40 in January back then, it was considered a heat wave.

At any rate, I can’t recall any January days when we didn’t need fires built at the schoolhouse. Starting in 5th grade and continuing through 8th grade, I was able to land fire-building jobs with one teacher or another while I was enrolled at Blair Branch Grade School.

The school had three rooms, three teachers, and, three big, pot-bellied, coal-fired, heating stoves that had to be stoked and cleaned every day during cold weather.

The teachers figured out which boys could get to school early, reliably build a fire, stay after school to take out ashes, carry in several buckets of coal and get ready for the next day without burning the building down.

They also figured that one stove was enough responsibility for one boy, so three of us landed these jobs. I doubt that anyone besides J.B. Blair and me ever built fires for four consecutive years. The jobs were usually held by 7th or 8th graders. Building fires and performing the chores associated with keeping the building comfortable during cold weather took about an hour each day and we fire builders were paid a dime a day for our labor.

Each of us was entrusted with a key to open the padlocks to our respective rooms, which meant that we had the building open at least an hour before any teachers showed up. We also had to make sure the building was empty when we locked up well after they’d gone home for the night.

I usually showed up much earlier than an hour before school began, because Dad had a mining job that required him to leave home at 4 a.m. If I got up early enough, I could ride out of the hollow with Dad instead of having to walk a mile and a half before daylight. I might also catch a ride with Lawson Brown or Lovell Blair in their loaded coal trucks if I didn’t get up in time to ride with Dad. Usually, I had to hoof it at least one day each week. I even had my own carbide light for those mornings when walking was the only alternative.

On those extra-early mornings, I would simply start a fire and get it going, turn the lights back off, then curl up on the floor and go back to sleep for a couple of hours until one of the other fire builders started banging around loud enough to wake me when they showed up at 7. Many times I would be so engrossed in a book by an author such as Zane Gray, Mark Twain, Robert Louis Stevenson, Daniel Defoe, James Fenimore Cooper, Herman Melville, or the latest Hardy Boys mystery, that I didn’t need to go back to sleep.

School was rarely canceled because of weather back in those days. High water from heavy rain was more apt to shut Blair Branch down than a heavy snow. Every student at Blair Branch Grade School walked to the building. Even though we only had one teacher during my tenure who actually lived on the hollow, most of the others lived close enough to walk if the roads were too bad to drive on.

Still, I do remember rare days when we’d show up, get our fires built, wait around until late morning, and still not have one of the three teachers show up. Everybody would finally go back home except us fire builders, because we had to wait around for our stoves to cool down enough to take the ashes out and get prepared for the next day.

I also remember getting to the schoolhouse, getting a fire built, and then learning from one of the neighbors that school had officially been canceled.

The only way we had to get that notification was from WTCW, the Whitesburg radio station, and it didn’t sign on the air until 6:30 in the morning, which was too late to get the word out to the fire builders.

This meant, of course, that we had wasted a hundred pounds of coal and, if modern science is to be believed, needlessly contributed to global warming.