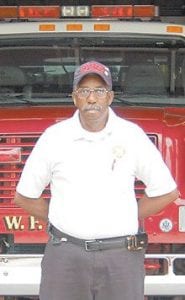 Fire Chief Truman Thompson is retiring from his position after working at the Whitesburg Fire Department for 34 years.

“It’s time for me to step down and let the younger generation come in,” said Thompson.

“The reason I joined the fire department was to help people,” said Thompson. “I wasn’t a rich man, wasn’t able to just do anything for people. I hope I have done something in the past to make someone’s life a lot safer and happier.”.

Thompson, who is black, said his Whitesburg Fire Department was being accepted by the other members.

Thompson, who served as assistant chief alongside Bowen, still holds the former longtime chief in high regard.

“He was a good chief,” said Thompson. “He really was. He gave me more knowledge and understanding of the fire service.”

Roy Benge was named fire chief after Bowen retired. Thompson was appointed to the position when Benge left in 1998.

Thompson said the equipment available to firefighters here has improved greatley since he first joined.

“When I came on we only had two trucks — a snorkel and a pumper,” said Thompson. “Now we have four — a rescue truck, two engines and a platform truck.”

Thompson said there are usually one or two structure fires a year in Whitesburg and three or four car fires. He said the department answered 77 calls in 2008.

“Whatever came through, we were there,” said Thompson.

The fire department has five paid firefighters and 32 volunteers.

“You couldn’t find a better bunch of firemen to work with,” said Thompson. “We are one big happy family.”

“Our main goal was to make sure everyone came home safe and fortunately no one was ever hurt,” said Lee Anna Mullins, safety officer for the Whitesburg Fire Department.

Thompson said the worst fire he ever fought in his career was the one that destroyed the Reynolds’s Furniture building located on Webb Avenue beside The Mountain Eagle.

“It was pure chaos,” said Thompson. “I have never seen a building burn like that. It was the quickest burning fire I have ever seen.”

Thompson said he received the call at 2 a.m. and continued to fight the fire way up into the next day.

Thompson said he has seen much during his tenure, none of which were like the other.

Thompson said the next chief should “always be prepared to be one step ahead of any situation that you many face.”

“This is a big set of shoes to fill to tell you the truth,” said Thompson. “You have to keep up with your equipment, resources and manpower. You have to know what is going on at all times.”

Thompson said he appreciates the backing of the public he received during his tenure as fire chief.

“Not only has Mr. Thompson given the City of Whitesburg 34 years of dedicated and competent service as a firefighter and fire chief, but he is also a very tremendous human being,” said Whitesburg Mayor James W. Craft. “It has been a joy and honor to have worked with him for the past three years during my mayoralship. Truman will be greatly missed and difficult to replace.”

Joe Back, assistant fire chief, said wishes Thompson would stay with the department.

“I hate to see him go, but wish him luck,” said Mullins.