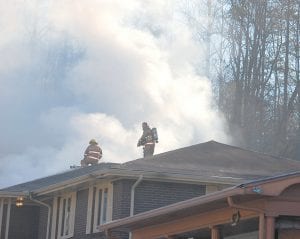 Firefighters with the Whitesburg Fire Department worked Monday morning to extinguish flames at the West Whitesburg home of Dr. Byron Thomas and his wife Amanda. The cause of the fire hasn’t yet been determined. “It happened during an eight-minute period,” said Dr. Thomas. “It just happened really fast.” (Photo by Sally Barto)

A Monday morning fire caused extensive damage to a brick home in Whitesburg and the state fire marshal is expected to determine the cause today (Wednesday).

Byron and Amanda Thomas took ownership of the one-story house located on Ohio Street in Westwood on Oct. 20 and the house has been under renovation ever since. The Thomases and their two children, Ava, 3, and Mckynlee, 8 months, had been living in their new house up until Thanksgiving Day. Byron Thomas said they decided to stay with Amanda Thomas’s parents, Keith and Greta Howard of Whitesburg, on Nov. 25 after it became difficult to live in the house during the remodeling phase. Thomas, a physician, said his family still spent a lot of time in the house during the daytime, but had spent the last few nights at the Howard residence. His wife and children were not at the house at the time of the fire.

Dr. Thomas said he had stopped by the home around 5 a.m. on Nov. 29 to feed the family cat and dog and get a medical book from the garage before he drove to work at Norton Community Hospital, where he is in medical training. He said around 8 a.m., two carpenters were installing a commode in a bathroom toward the back of the house and another carpenter had just returned from Frazier’s Farmer Supply and saw smoke coming from the garage.

Whitesburg Fire Chief Gary Mullins said Ken Sexton Jr., a firefighter, saw smoke on his way to work and reported the fire to the fire department.

“It happened during an eight-minute period,” said Thomas. “It just happened really fast. Apparently it got really hot throughout the house.”

“It went up pretty quick,” said Mullins. “There was a lot of heat in the house.”

“I lost all of my medical books, diplomas, wedding pictures,” said Dr. Thomas. “Everything of value was in that garage. We knew they were special so we moved them out of the carpenters’ way.”

Also being stored in the garage was the family’s furniture and dishes.

“It’s just material stuff ,” said Dr. Thomas. “It can be bought or rebuilt. It was a miracle we had been out of that house.”

Dr. Thomas said one of the carpenters was able to go back inside the house to retrieve a schnauzer dog with no problem. A cat also survived the fire with no problems.

In addition to the garage and all that was in it being, Dr. Thomas said the roof received extensive fire damage, along with heavy smoke and water damage to the living room and dining room.

“The smoke damage was horrible,” he said, adding that a brand new kitchen was also recently installed in the house. “It was beautiful.”

Mullins said new wood cabinets were badly damaged and will have to be replaced.

Dr. Thomas said one of the reasons he and his wife were first drawn to the house, previously owned by Ruth Ward and the late J.T. Ward, was its good location and nice yard. The family will stay in a house owned by a friend of the family until their house can be rebuilt.

After Dr. Thomas finishes his internship at Norton Community Hospital, he will practice internal medicine at Mountain Comprehensive Health Corporation beginning in August.