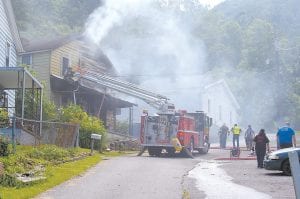 FIRE DEPARTMENTS FROM JENKINS, Neon and Mayking responded to a house fire at 324 Wrights Hollow Circle about 11:15 a.m. Monday. First reports were that someone was still inside the house, but firefighters confirmed that was not the case. Two dogs did die in the blaze, according to the Jenkins Volunteer Fire Department. The more than 100-year-old home is still standing, but is a total loss. Jenkins Police officer and firefighter Jim Stephens said they are still trying to determine who owned the house, and the cause of the fire. (Photo by Sam Adams)