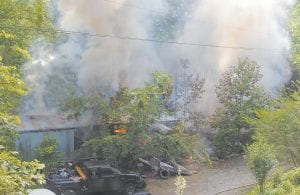 FIRE CONSUMED TWO TRAILERS and threatened a third Monday evening at UZ. Firefighters were unable to reach propane tanks behind the trailer, and the tanks exploded, sending one airborne across the trailer. (Photo by Sam Adams)

Two mobile homes at UZ were total losses after fire swept through them Monday evening.

Sandlick Fire Chief Mike Amburgey said the first trailer was already burned to the ground when his department arrived, and the other was on fire. To make matters worse, several propane tanks behind the trailer that was still burning were screeching loudly as a gas escaped from their pressure relief valves. One of the tanks exploded as District 4 Constable Terry Perkins, the first person to respond, arrived at the scene.

“I thought it was a person flying across the top of the trailer, but it was a propane tank,” Perkins said.

“I heard that roar and I told them to run,” Amburgey said.

Those tanks stayed on the ground when the valves blew off.

“The first one had to be turned over to go airborne like that,” Am-