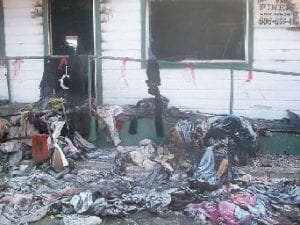 For years, Debbie Campbell had wanted to open a consignment store where people could sell gently-used clothing or items with price tags still on them.

In October, Campbell opened the store in West Whitesburg, named “Annie’s Frugal Finery” in honor of her 16-year-old daughter, and has worked ever since to build a business where people buy and sell clothes.

Just as Campbell was beginning to see her dream come true, an electrical fire destroyed the building, located near KY 15, and everything inside.

Campbell said business was going well when she discovered the fire on Jan. 13. She said about 16 customers had been in the store by 3:45 p.m., when she went to the back for a snack because she hadn’t had time for lunch.

Campbell said that when she arrived in the back room she saw smoke and pulled some clothes away from a wall to try to find the source. She said she realized there was nothing she could do to extinguish the flames after the “total wall ignited” as she was looking on. 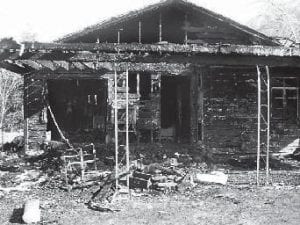 The building in which Annie’s Frugal Finery was located in West Whitesburg was destroyed by fire last week. Owner Debbie Campbell said she hopes to reopen the business which was named for her daughter.

“I realized there was nothing I could do,” she said.

After making sure two customers who were shopping in the store were safely outside, Campbell said she grabbed her purse and the cash drawer and headed for the door.

“I started out the front door and slid on the ice and totally wiped out, which turned out to be a blessing because when I fell the windows blew out,” said Campbell. “Then I got back up and ran around to move my car. As I pulled out, the power line fell. A second later and it would have hit my car.”

Campbell said the Whitesburg Fire Department responded quickly to the fire, but there was little they were able to do since the building was totally engulfed within six minutes.

“Windows blew out and stuff was falling,” said Campbell. “It basically went up like a tinderbox. They said they’d never seen a fire burn any quicker. I am thankful to the fire department for coming so quickly and working so hard (and) to Wayne Watts for being the first to respond. Every window blew out and even when they’d gotten the fire put out in the house the attic was still burning and they cut holes in the roof to shoot water in there.”

Though the fire has left her heartbroken, Campbell said she hopes to back in business before too long.

“I really want to restart the business,” said Campbell. “I really feel that it off ered something to the community. I loved the store and feel like it was something special in our community.”

Campbell said people who brought in clothes to sale were called consigners and would earn 50 percent if an item sold.

“The shop was a place for people to buy and sale good quality clothing, shoes and purses,” said Lee Adams of Whitco, who bought and sold items at the store. “I love to keep my shopping dollars here in Letcher County and Annie’s Frugal Finery was a way to do that and also come away with a wonderful feeling of purchasing quality items at a great price. I was also able to make money by consigning items I didn’t need any longer.”

When the store first opened, Campbell said she had nine consigners — mostly friends and family. The number of consigners had grown to 179 in three months.

“Word just spread and people really embraced that store,” said Campbell. “I had regular customers, but we were still getting new shoppers.”