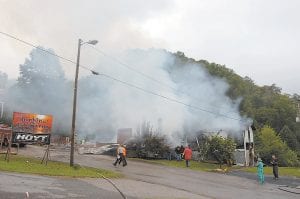 Hatfield’s Hunting and Fishing and an apartment located at the back of the building were destroyed by a fire believed to have been caused by faulty wiring Tuesday morning at Van. (Eagle photo)

Owners of a outdoor supply store at Van that burned down Tuesday morning intend to be back in business soon.

The fire that destroyed Hatfield’s Hunting and Fishing was reported around 6:30 a.m. Tuesday by a motorist traveling on Highway 15. The motorist called 9-1-1 after seeing flames coming out of the building, which had an apartment located on the backside of the store.

Letcher, Mayking and Sandlick fire departments responded to the fire at 6065 Highway 15 South.

“Both structures — store and apartment — are a total loss,” said Lt. Brian Damron of the Letcher County Sheriff ’s Department.

Damron said the fire appeared to be electrical. The Kentucky State Police arson investigator is expected to be on scene today (Wednesday), and the sheriff ’s department will continue its investigation.

Hatfield’s Hunting and Fishing is owned by Alvin Baker and Chancey and Whitney Hatfield. Baker and the Hatfields were leasing the building through Otis Brown Property.

Lana Polly Mullins, Whitney Hatfield’s mother, said nothing was salvaged from what was left of the building, but that the Hatfields and Baker plan to reopen the business as soon as possible.