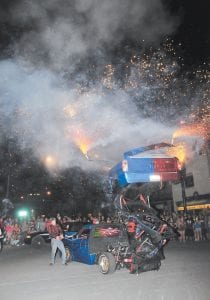 Saturday night’s exhibition by Jamie Kelly and his mini truck, the “Radical Fireworks Shooting, Flame Throwing Monster Schizophrenia” was one to remember for fans new and old of the Heritage Car and Truck show which has been held in downtown Whitesburg for more than a decade. A combination of beautiful late summer weather and reports that the show is ending drew large crowds into Whitesburg over the weekend. The two photos seen here were snapped on Main Street. Show organizer Lee Michael Caudill says the Heritage 2K13 event marks the last in a series of shows ending because of a lack of sponsorship. Caudill estimates the show, which draws people from at least 20 states, has poured $250,000 a year into the local economy. (Photos by Chris Anderson) 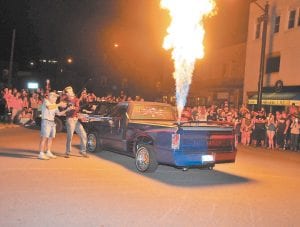