Firefighter released from hospital after being badly hurt in accident 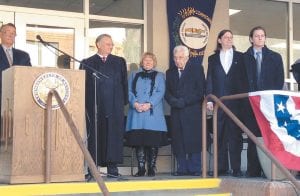 A young Mayking firefighter was returned to his home Monday from a hospital in Kingsport, Tenn., where he was airlifted last Friday after being badly injured in traffic accident at Jeremiah.

James Ison of Pine Creek, who volunteers for both the Mayking and Sandlick fire departments in Letcher County, was answering a “mutual aid” call to fight a barn fire in the Redstar community when he entered a steep curve on KY Highway 7 at the mouth of Blair Branch, lost control of the Ford F-150 pickup he was driving, and crashed into a tree.

Ison, who is about 19, was rescued from the burning pickup by fellow firefighters who were traveling to Redstar in a firetruck from Sandlick and were about five min utes behind the accident.

“We had no clue it was our fireman,” said Charles Polly, also a volunteer at Mayking and Sandlick. “We rolled on-scene (and) myself and my wife, Rachel Polly, and Aftan Fleming got out and determined it was a serious injury and alerted Wings Air Rescue to be on standby. At that time the engine bay of his truck burst into flames and fire was rolling back into the truck cab with him. Quickly we got a charged hose line and extinguished the flame. Had we been any farther away from the wreck, if could have easily became a fatal truck fire.” 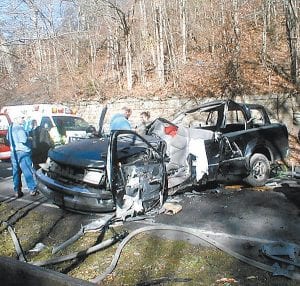 Ison’s father, Mike Ison, also of Pert Creek, was thankful Monday afternoon that his son was on the way back to Letcher County from Holston Valley Medical Center and will be able recover at home from a broken thigh bone and a broken hip.

“I’m just thankful that he’s alive and that nobody else was involved,” said the elder Ison, who owns and operates the Auto Clinic at Pine Creek. “It could have been much worse.” 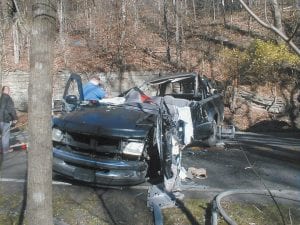 Volunteer firefighter James Ison had to be cut out of this Ford F-150 pickup after wrecking on KY 7 while driving to the Redstar community to answer a fire call. Ison was released from a Kingsport, Tennessee hospital on Monday.

Mike Ison said his son lost control of his pickup when he “hit a slick spot” in the steep curve known for being the site of a number of accidents.

Polly said that after the Letcher Rescue Squad arrived at the scene of the wreck “we used the Jaws of Life to remove the door and roof.”

James Ison “was then removed and placed into the Letcher ambulance for transport to the landing zone and flown to Holston Valley,” added Polly, who is also a full-time member of the Neon Fire Department. “He has a broken femur (thigh bone) and he had a couple surgeries to have a metal rod placed.”

Two metal barns, including one that was nearly full of hay, were heavily damaged in the fire at Redstar, a former mining camp located between Blackey and the Letcher-Perry county line.

Officials say the fire started late Friday morning, apparently after a heater placed in the hay barn to keep chickens warm ignited some of the hay .

The traffic accident involving firefighter Ison was reported shortly after 11:30 a.m. on November 20.