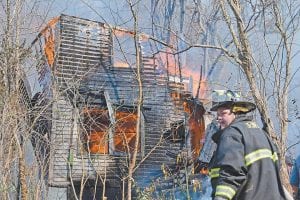 HOUSE FIRE — A Jenkins firefighter stands near an abandoned house that was burned, presumably by the Pine Mountain wildfire, Monday afternoon. The house was the only large structure believed to have been destroyed by the fire. (Photo by Chris Anderson)

Forest fires were understandably the main topic at the November meeting of the Jenkins City Council this week.

With smoke from the fires hanging over downtown Jenkins Monday night, Mayor Todd Depriest told the council that members of the Jenkins Volunteer Fire Department, volunteers from the area, and volunteer fire departments from other regions are all working to keep the fires from damaging homes and endangering citizens.

Depriest said that if individual homeowners need assistance, calls to the city police department will be answered and officers will respond and assess the situation. He said the best thing homeowners can do at this time is to clear leaves and dry grass within 50 feet of their homes and keep their water hoses handy in case burning debris from the fires blow near or on their homes. He emphasized how strenuous it is for firefighters to do their work on the steep mountains slopes that surround Jenkins, and the danger of trying to fight the fires after dark.

Councilman Rick Damron praised all the volunteers, local and otherwise, and said a lot of other fire departments have responded to help protect the city. Depriest said there are a lot of individual efforts as well and added that neighbors helping neighbors and the help from the volunteers speaks very well of the city and the people who are helping. He also thanked all the different groups who have brought food to the firefighters, and said the Burdine Freewill Baptist Church is feeding them as they come in.

In a phone conversation Tuesday morning with The Mountain Eagle, Mayor Depriest said that things “are calming down” and the fires around the town are under control. He added that one abandoned house in Wrights Hollow burned, but the house was being demolished before the fire anyway.

In other business, the city’s waterline replacement project continues to show excellent results as the overall loss of treated water stood at 12 percent for October. Of that amount, 1,201,500 gallons were unaccounted for and 25,000 gallons were used by the Jenkins Volunteer Fire Department. The city produced 10,442,000 gallons and sold 9,215,000.

The council voted unanimously to pay separate invoices for the Jenkins/ Fleming- Neon Waterline Connection totaling $118,426.83 and $77,805.46. The entire Jenkins/Fleming Neon Waterline Connection is paid for by Abandoned Mine Lands with no cost to the city. The council also approved a roadblock in December to be held to raise funds for the Jenkins High School boys’ baseball team.