Two fires at nearly the same time left a vacant business building and an abandoned house on the other side of the county burned to the ground.

According to Letcher Fire Department, the first fire was reported about 2 a.m. Monday in an abandoned home on KY 588 in Blackey. Wallace “Spanky” Bolling, a longtime firefighter and emergency medical technician, said he arrived from his home a mile away in less than seven minutes, and found the house already burned to the ground. While firefighters were still on the scene of that fire, a second call came to assist several other fire departments with a fire at the Drill Steel Services building at Dry Fork. 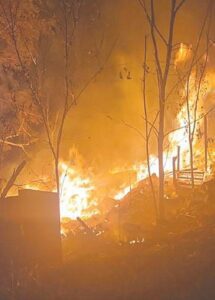 Neither building was occupied.

Firefighters kept the fire out of the front part of the Drill Steel Services building, which is made of brick. It was still standing after daylight Monday, but a large metal addition in the back had collapsed. The house on KY 588 was a total loss. The owner of the Dry Fork building has requested an arson investigation, fire officials said.