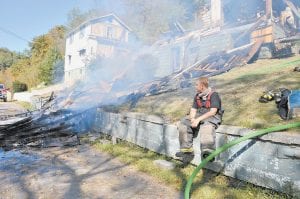 Jenkins volunteer fireman Tyler Branham rested on a concrete wall after his department fought a house fire near Dunham. The blaze destroyed the home of Todd Collier, who is scheduled to stand trial for the shooting death of his neighbor, longtime Jenkins firefighter Mark Sturgill. The fire happened on October 7, the one-year anniversary of Sturgill’s death. Kentucky State Police Detective Joshua Bunch, an arson investigator, said Tuesday the cause of the fire is still unknown. (Photo by Chris Anderson)