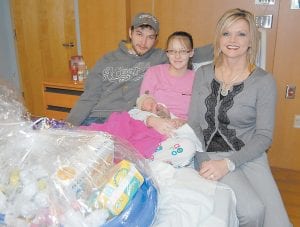 — Dakota Alexander McClain was the first baby born in Letcher County in 2013 when he was delivered at midnight January 3 at the Whitesburg hospital. He is the son of Dustin McClain and Sabrina Holland of Redfox. Pictured with the parents and Dakota is Jennifer Herrell, APRN, CNM, who delivered the baby for the Whitesburg Women’s Center. For being the first baby born in 2013, the family received a gift basket from Whitesburg ARH and a $100 Walmart gift card from the Whitesburg Women’s Center. Dakota has one sister, Mackenna McClain. (Photo by Sally Barto)