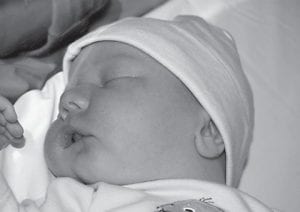 Bill Colby Adams was the first baby born in 2010 at Whitesburg Appalachian Regional Hospital. The baby was born at 9:02 a.m. on January 2. He weighed eight pounds, three ounces, and is the son of Renita Stacy and Bill Robert Adams of Jeremiah.