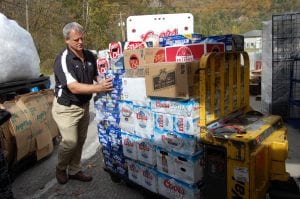 The first truck bringing beer to Letcher County for legalized package sales arrived just before 2:30 p.m. Friday at the loading ramp outside Food City in Whitesburg. Legal sales have been anticipated since late June, when Whitesburg voters elected by more than a two-to-one margin to expand alcohol sales from restaurant-only.

A store at Ermine, East KY Discount Tobacco and Beer, is also expected to receive its first beer shipment today. Both businesses got their alcohol licenses earlier Friday.
Rite Aid pharmacy got its license Oct. 12 and announced earlier it will receive its first alcohol shipment Monday morning.