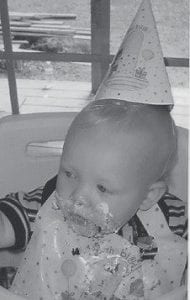 FIRST BIRTHDAY – Keegon Forester Banks will celebrate his first birthday Sept. 18. His parents are Russel and Julie Banks. He is the grandson of Carol Cornett, and Isabell Frazier and the late Billy R. Frazier. He was named for his cousin, the late Forester D. Caudill.