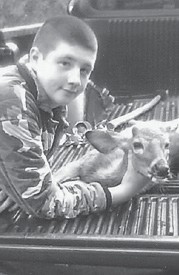 FIRST DEER — Jeremiah Hensley killed his first deer at Colson during the October Youth Hunt with his father, Chris Hensley of Whitesburg, and brother, Joshua Hensley. He is a sixth-grade student at Whitesburg Middle School. He is also the son of Leslie Adams of Ermine.