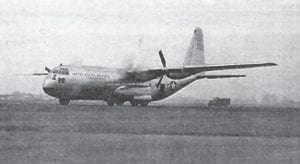 In 1959, my commander asked me to visit our printing departments in the Far East to see what they needed. The plane I flew on was the C-130 that had made its maiden flight on Aug. 23, 1954.

The C-130 celebrated 60 years of flying and is still in production today, making it the longest running military production line in history.

The need for the C-130 came after the Korean War to fill the void for medium cargo tactical transports. In its first six decades, the C-130 shaped aviation history, redefined industry standards and exhibited flexibility that other aircraft have yet to match. The C-130 remains the world’s most proven airlifter because of its ability to adapt, remain relevant and deliver results no matter the mission.

It was the largest aircraft I had flown on at that time until a couple of years later when I flew on a SAC B-52 bomber piloted by Jimmy Stewart after he was promoted to General.