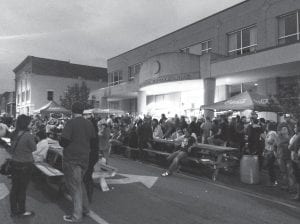 The crowd in downtown Whitesburg for the city’s first Oktoberfest event was continuing to swell as darkness closed in. (Photo by Ray Gish)

The Whitesburg mayor and an owner of a downtown restaurant say the city’s inaugural Oktoberfest was a success.

“It was more successful than I ever thought it would be,” said Tyler Ward, owner and operator of The Thirsty Heifer.

“The food was good,” said Whitesburg Mayor James W. Craft. “The music was good. It was extremely well attended.”

Craft said the festival created excitement about the town and has a positive effect on the local economy.

“The reason it worked, and I truly believe this, is everyone worked together,” said Ward. “I think it shows when everyone works together we can do nice things.”

Several restaurants were crowded inside its establishments in addition to booths on Main Street.

“It was great for the downtown businesses,” said Ward.

At the request of the Downtown Merchants Association, the Whitesburg City Council approved the festival in September.

Appalshop loaned the festival its sound system. Mountain Heritage Festival Committee volunteered the use of its picnic tables.

Oktoberfest originated in Munich, Germany and features the consumption of beer, sausages and other items.

“We’re looking forward to making it an annual event,” said Craft. “The credit for organizing and putting all of that together goes to Tyler Ward. He worked with the City in getting it all done and he did a masterful job.”