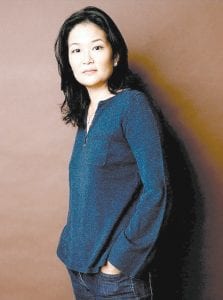 Novelist Janice Y.K. Lee is flying in a better class.

“I came in here from Hong Kong and decided to treat myself and upgrade to business,” Lee said during a recent interview from Los Angeles, where she arrived for a promotional tour (her publisher paid for coach) for the paperback of her debut novel, “The Piano Teacher.”

Lee received strong critical attention and respectable sales for the hardcover of her book, but she may well be the latest author published by Penguin Group (USA) to become a major seller in paperback. According to Nielsen BookScan, which tracks around 75 percent of industry sales, the paperback has sold 151,000 copies since its release in November, already far above the 47,000 for the hardcover, which came out a year ago.

The success shocked Lee, who likens her experience to “giving birth to an extraordinary child; you can’t take all the credit.” But it’s most familiar for Penguin, where paperback smashes in the past few years include Elizabeth Gilbert’s “Eat, Pray, Love,” Greg Mortenson’s “Three Cups of Tea” and Kim Edwards’ “The Memory Keeper’s Daughter.”

“Right from the time the hardcover group started promoting this book, the paperback group had its eye on it,” says Patrick Nolan, Penguin’s director and vice president of trade paperback sales. “We made sure that our sales reps had manuscripts and galleys the same time as hardcover folks and it remained on our radar screen.”

“And one thing they do is resend the book as a reader’s copy to remind us the paperback is coming. I’ve told other publishers this is smart, because it gives the book a whole new life. That happened with ‘Memory Keeper’s Daughter.’ Few of us had read it in hardcover, but when we got the chance to later on, we loved it and we sold it like crazy.”

Lee’s novel begins in Hong Kong after World War II, in the early 1950s. Claire Pendleton is a 28-year-old newlywed who has moved from Britain with her husband and is hired by the Chens, an affluent Chinese couple, to teach piano to their daughter. More fatefully, she meets the Chens’ chauffeur, Englishman Will Truesdale, who is haunted by an affair that began a decade earlier.

Lee has lived all over the world and says she’s fascinated by what people do when they are “un- moored,” away from who and what they know. Booksellers praise “The Piano Teacher” as ideal for a cherished customer base: the book club.

“The story raises a lot of questions about what would you do in certain kinds of situations. And that’s bread and butter for a book club,” says Barnes & Noble Inc. fiction buyer Sessalee Hensley.

“She’s the type of author our book group members love to read: Her book is really well written and has an interesting historical perspective,” says Susan McBeth, director of marketing and events at Warwick’s in La Jolla, Calif., where Lee began her paperback tour. “Traditionally, you don’t have a lot of people come out for a first-time novelist. We drew about 70 people and that speaks to her popularity, her claim as a writer.”

Lee, 38, is a native of Hong Kong who says she always dreamed of writing, majored in English and American literature at Harvard University. Inspired by her reading about expatriates in Hong Kong during World War II, she began the book in 2002 while a graduate student in the Hunter College writing program.

“I didn’t know that world existed in Hong Kong,” she says. “It’s such a unique little place in Asia, neither Chinese nor Hong Kong and not readily available to people in Hong Kong. It seemed like a movie — British expatriates, American expatriates, leading these isolated lives.”

For several years, writing and family unfolded like alternating chapters. She worked on the book, had a baby, worked more on the book, had another baby. By 2007, she and her husband had relocated to Hong Kong, she was pregnant with twins and was determined to complete the novel while she had time. The manuscript was snapped up by Kathryn Court, president and publisher of Penguin Books, and the finished version was sent to Penguin within days of the twins’ birth.

“Fortunately, the editorial work we discussed wasn’t anything she couldn’t handle,” Court says. “The main concern I had was that the ending seemed a little too fast. Too much information was not revealed until the end, so we needed to work on the pacing. But she handled it brilliantly.”

Lee says she writes whenever she can and has an idea for a new novel, but isn’t ready to give details. Meanwhile, she is averaging almost a city a day for her tour. The road tires her, but also comforts: Twice, she has spotted people at airports carrying a copy of her book.