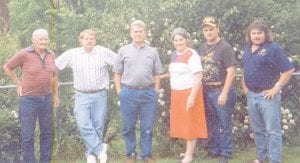 I received a call from my commander at Sampson Air Base, Geneva, N.Y., in April, 1950. The base was training recruits during the Korean War.

A young kid received a “Dear John” letter from this girlfriend. The young man went AWOL (absent without leave) and was picked up by the military police and taken to Mitchell Air Field, a few miles from New York City. I was asked to pick the kid up and bring him back to Sampson.

I took one of my staff sergeants with me. We took a train to just outside of New York City and caught a bus to Mitchell Field. We would stay in the barracks that night and return to our base in the morning.

My staff sergeant was from New York City and. knowing I had never been there, wanted to show me around. He took me to a fancy restaurant and told me to order anything I wanted, he was buying.

I ordered a hamburger and fries, and he ordered “mountain oysters.” I guess it was for my benefit. My food cost him 99 cents, and his was over $8. I never knew that folks not from the South knew what mountain oysters were.

The next morning we went to the MPs’ guardhouse to pick up the kid. He was in handcuffs and had been crying. He was a mess.

I called my base and told them to have the MPs meet our train. When we got on the train I took the ‘cuffs off of the kid. I knew then I was going to help him. I put the ‘cuffs back on him before the train got back to where the MPs were. We all rode back to the base together.

I knew the MPs, and I also knew the provost marshal, and he let me call my commander. I wanted the kid to go back to his flight and finish his training. I found out for the first time that this kid was from Pikeville. I knew then that I had to help him.

My commander told the provost marshal to turn the kid loose. He was crying again from what we had done for him.

Halfway into his training, his parents came to spend most of a day with him, and they took me to lunch. I arranged for him to go to radar school after his training. We wrote to each other for a few years, but with both of us moving around a lot, we lost track of each other.