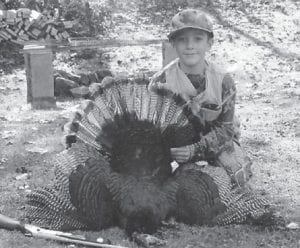 Preston Helle, 7, of Sandlick, killed his first turkey while hunting with his father Scott Helle and his cousin Dale Brown on the first day of shotgun turkey season. He is a second-grade student at West Whitesburg Elementary School and is also the son of Gabrielle Helle and has a sister, Kelsey Helle, 10. His grandparents are Roberta and Donald Brown of Sandlick, and Cindi Hall of Neon.