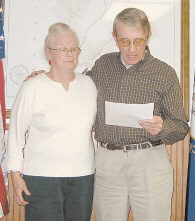 A controversy over using coal severance tax money to help refurbish the Old Jenkins High School carried over this week to the Jenkins City Council.

At the council’s April meeting on Monday, District Five Magistrate Wayne Fleming, who represents Jenkins on the Letcher Fiscal Court, told the council he was heartbroken over recent changes in the allocation of the coal-tax money and blamed the changes on State Senator Johnny Ray Turner and other members of the fiscal court.

“I’m disappointed in the way the severance package turned out,” said Fleming. “I thought the projects (94th District State Representative) Leslie Combs put in would be kept. Evidently (29th District State Senator) City of Jenkins should not reap the benefits of the coal severance tax. The water projects in Jenkins, the sewer project in Burdine, nearly everything with City of Jenkins written on it was taken out. Jenkins is still part of Letcher County, but evidently sometimes we aren’t. Johnny Ray Turner took the recommendations of (Judge/Executive) Jim Ward. The only way we can answer this is at the polls.”

Council member Chuck Anderson told Fleming the process of obtaining coal severance tax funding had been “a real education for us.” Anderson said he hadn’t thought the other fiscal court members would be able to convince Turner and other General Assembly members to disregard the recommendations of Combs.

“Only Wayne Fleming stood up for us,” said Anderson.

Fleming told the council and a packed house that he apologized to them on behalf of the court. He also said that Leslie Combs had worked long and hard to keep the projects in the funding package and did win on a few issues.

“I’m heartbroken,” said Fleming. “This has been a real slap in the face for Jenkins. Somebody wrote in the paper (in The Mountain Eagle’s ‘Speak your Piece’) that Jenkins should move out of the county. Maybe we should go to Pike County or Virginia.”

In a related matter, representatives of the Old Jenkins High School Committee approached the council Monday night to discuss a confrontational discussion held between District Two Magistrate Archie Banks and committee representative Jim Polly during the fiscal court’s March meeting. It was during that meeting that Banks offered ownership of the Old Jenkins High School to the committee or to the city. Polly told the council he felt pressured to make a decision and asked them to consider taking over ownership of the old high school from the county if it is legally possible for a transfer from the county to the city.

“If you read the paper, you are aware we were told that the county was tired of the old school project,” said Polly. “They said they wanted to transfer ownership to the city at no cost. They said it cost them too much. Because the building is in Jenkins, they got tired of fooling with it.”

Polly said he had filed a Freedom of Information request to see the county’s costs for the old high school. He said the entire cost amounted to less than $30 a month, except for insurance which cost $4,800 per year. The other cost was for utilities. Polly said construction and repairs and all other funding for the building had come from a coal severance tax allocation made during the Paul Patton administration.

Other members of the Old School Committee also addressed the council. Betty Hunsaker said the school is now sound as far as the building core and roof and that since an elevator installation which complies with accessibility laws is now almost complete, the building will be eligible for federal grants. She said the roof is in good shape and a problem with water in the basement which had plagued the school since it was built has been addressed by rerouting water flow and installing sump pumps. Hunsaker also told the court that Jenkins Senior Citizens is located in the building and could provide a source of revenue if the city were to take possession of the building.

While all council members agreed that the old school building is an important historical and emotional landmark for Jenkins, nobody wanted to rush into taking it over. Several members expressed their concerns over the city’s upcoming budget and how to pay for raises and benefits for city workers as the process now stands.

Council Member Carol Anne Litts told the committee it would be very difficult to eliminate raises and benefits for city workers in order to take possession of the building. She said she had been in the last class to graduate from the old school before the new high school was opened and the building was very dear to her.

“The city has its back to the wall,” said Litts. “Money is already a problem. Some of our workers don’t really make a living wage.”

Council member Terry Braddock told committee members they had done a fine job with the building, but suggested that they look to sell the building to an entity which might complete it and offer the prospect of bringing jobs to the city as well. Braddock mentioned a statement made by University of Kentucky officials to the effect that they were interested in locating a geology lab in the building. Polly replied that UK had expressed an interest, but only after the renovations were complete, as had a number of other prospective occupants.

Council members Rebecca Terrill and Linda Baldwin, both of whom were graduated from Jenkins High School in the old building, also expressed doubts about the city’s ability to assume such a large obligation.

Baldwin agreed with Litts that money would be tight in the upcoming budget and said she did not know where more would come from. Baldwin, who works for LKLP, said the cost of operating in the building had caused LKLP to move Head Start from downtown to Dairy Hollow.

Terrill suggested the council tour the building to see what progress has been made and then ask Mayor Charles Dixon to have a meeting to discuss financial possibilities and obligations associated with taking over the building.

Dixon told the council he will work with the committee to set up a tour and then convene all interested parties for discussions as to the feasibility of taking over the old high school. He also said he had spoken with Judge Ward and had been told the judge would attend Monday’s meeting, but Ward did not show up.

Dixon told the council not to totally count out the water projects or sewer projects. He said cuts to the Cane Branch Water Project and the Burdine sewer project had hit especially hard.

“A lot has been said about the coal severance money tonight,” said Dixon. “I spoke with Judge Ward earlier and he said the sewer projects would be included in a special bonding package. And the whole thing is contingent on whether the governor signs the budget.”

In still another related matter, Burdine resident Mary Ann Mullins, who has spearheaded efforts to obtain funding for a World War II memorial in Jenkins, reported that her efforts have been successful, thanks to the intervention of Representative Leslie Combs. Mullins said Combs had called her on the previous Tuesday evening to tell her that the bill to which the funding was attached had passed and the city will receive $20,000 for the monument. Mullins expressed her gratitude to Combs and Magistrate Fleming for their efforts to help with the monument.

“I can’t say enough about Wayne (Fleming) and Leslie Combs,” said Mullins. “Leslie fought so we could get the $20,000. When the dedication is made, it will be something for the city to be proud of. This is to honor World War II veterans, who were truly the greatest generation.”

The council voted unanimously to allocate space in the grassy area in front of the Dave Zegeer Coal Museum for the granite monument which will bear the names of all Jenkins area veterans who served in World War II. The street in front of the museum will be renamed Veterans Square as well. Mayor Dixon also presented Mullins with a certificate of appreciation and a plaque containing stone from the Pound Gap Cut for her work in obtaining the monument.