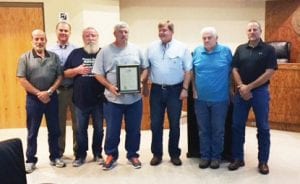 Members of the Letcher Fiscal Court pose with retiring Road Foreman William “Chettie” Smith, fourth from left, after honoring him for 27 years of service.

Letcher County is now one step closer to participating in a needle exchange program through the Department of Health following a unanimous vote of support at Monday’s fiscal court meeting. Letcher County Sheriff ’s Deputy Eugene Slone presented a request to the court to go on record with its support, and introduced Karen Cooper, district director of the Kentucky River District Health Department. Cooper asked the court to support the needle exchange effort and said that Letcher County had recently placed 50th in a study performed by the Center for Disease Control of the national counties most at risk for Hepatitis C and AIDS. The study measured the top 200 counties in the United States that were most vulnerable to a HIV outbreak.

Cooper told the court that Wolfe County had placed first in the study and Breathitt County came in at third. Of the top 10 counties in the nation, eight are in eastern Kentucky with Perry County at fourth and Clay at fifth. She added that in Kentucky, a needle exchange program can only be implemented if the local board of health and county and city governing bodies where the program will be located approve it. The health department approved the program in December.

Several magistrates, along with Judge/Executive Jim Ward, said they had mixed feelings about a needle exchange program. Fifth District Magistrate Wayne Fleming said he is aware of the increase in Hepatitis C in the county and that the disease needs to be controlled. Fleming and others also mentioned the presence of needles in public areas, including playgrounds and recreation sites. Judge Ward said that Letcher County Sanitation workers have been stuck with old needles while picking up garbage and expressed concern for first responders.

Fleming and others also asked if the needle exchange will include counseling or treatment, and expressed concerns that participants may have their names turned over to law enforcement. Fleming said he has been told by several people that if that is the case, they will not participate in a needle exchange. Cooper said that counseling will be offered and that there will be no exchange of information with law enforcement. She said that each participant will be offered counseling, the opportunity to get into treatment, and blood tests for needleborne disease, but that the main purpose is to cut down on the number of dirty needles that are re-used or discarded on public areas. Participants will receive new needles for old ones on a one-toone ratio. She added that the program will be grant funded and will not cost the county anything.

Gary Rogers, chief of the Letcher Fire and Rescue Department, said that getting stuck with “sharps” is common for EMTs and that he sees a number of cases every week when the anti-overdose spray Narcan is used to save lives. Rogers said that with the recent influx of heroin and fentanyl into the county, the problem will only grow. He added that if anyone on Letcher Fire and Rescue gets stuck, he would much rather it be with a clean needle.

“It will get worse,” said Rogers. “The hard stuff is here.”

Eugene Slone is the chairman of the UNITE/ ASAP (Agency for Substance Abuse Policy) Letcher County Board of Directors and both Sam Adams and his wife Legina are on the board. Slone said he and others on the board are voices for the protection of children and Narcan will also be provided to first responders as part of the grant that will fund the program.

Cooper said that having access to clean needles does not make it more likely that people will be attracted to injecting drugs or that users will use more frequently. She said that Booneville in Owsley County, has a program up and running.

Second District Magistrate Terry Adams said it is evident that the county has an epidemic of drug addiction and disease underway and if a needle exchange program can save one person from exposure to Hepatitis C or AIDS, it is worth participating. He made a motion for the court to register a vote of support and Fleming seconded. The vote was unanimous in favor of Adams’s motion.

Gabe Jenkins, Deer and Elk Program Coordinator for the Kentucky Department of Fish and Wildlife (KDFWR) , addressed the court about the effects of elk hunting in Letcher and surrounding counties. Jenkins said the average elk hunter who comes to Letcher County with a permit will spend more than $2,000 above licensing fees, and that the county realizes more than $90,000 a year from elk hunters. He said about $1.6 million is spent by hunters in the elk hunting region of eastern Kentucky annually.

Jenkins told the court that the department is aware that local residents whose land supports the elk herds would like more opportunities to get permits, and that landowners who have elk on their land will be eligible for permits through two programs. The Voucher Cooperator Program allows landowners with more than 100 acres of land, who control hunting rights to their property, to get one point for every female and two for every male elk harvested on their property. When they accumulate 20 points, they will get a permit. The Elk Restoration Permit Program allows landowners who give KDFWR staff the right to trap elk for re-location from their property the ability to accumulate points as well, two for males and one for females. Upon receiving 20 points, the landowner can receive a permit.

The court members voted unanimously to approve a resolution to enter into agreement with the Kentucky Transportation Cabinet to perform bituminous (hot mix asphalt) resurfacing and patching on county roads. They also conducted the first reading of the Letcher County Five Year Solid Waste Management Plan for 2018–2022.

Judge Ward told the court that Letcher County Emergency Management Director Paul Miles plans to retire. However, he said after a mandatory 30-day period, Miles will be eligible to assume the job again part time, and Ward said that will save the county quite a bit on his salary. The court unanimously approved allowing Miles to assume the duty part time following the 30-day period. They also voted to include the name of Private Ruben Watts to the Blackey Memorial Board. Watts served in the U.S. Army in World War II.

The court members read a resolution honoring the service of William Chester “Chettie” Smith for his 27 years of service to Letcher County. Smith recently retired as county road foreman. They also voted to renew the Mack Truck lease agreement to provide two newly-leased Mack Trucks for the county garage.

Bank balances for county agencies as of July 31: