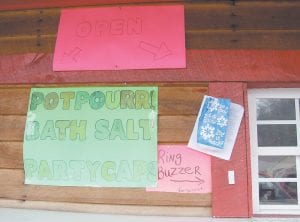 GOODS ADVERTISED FOR SALE — A former drive-in restaurant at Mayking which now calls itself TFX is among the targets of a new ordinance making its way through the Letcher Fiscal Court. The new law would make it illegal to sell synthetic marijuana and other herbal drugs sold as “potpourri” and “bath salt.” (Eagle photo)

The Letcher County Fiscal Court has approved the first reading of an ordinance that would ban the sale of synthetic marijuana here.

The ordinance was introduced during the fiscal court’s December meeting on Monday at the request of Letcher County Sheriff Danny Webb, and comes just a few weeks after a store specializing in the sale of “potpourri” opened in an old drive-in restaurant building at Mayking.

The store, which operates under the name TFX, advertises on the building’s front that it sells potpourri, “bath salt” and “party caps,” all three of which are names applied to herbal stimulants that can cause hallucinations when snorted or smoked.

Sold as potpourri or incense under names such as “Scooby Doo,” “K2” and “Head Trip,” synthetic drugs mimic the high of marijuana but have more dangerous side effects including seizures and dangerously elevated heart rates. The smokeable herbal products are typically made of plant material that’s been spiked with research chemicals — synthetic cannabinoids — that were developed to study brain receptors activated by marijuana.

The new law is aimed in part at a Mayking store which calls itself TFX and has been selling synthetic pot for several weeks.

Webb told the court the Mayking store is selling the synthetic marijuana products that are now technically legal since they were modified to get around laws passed earlier this year by the Kentucky General Assembly.

Webb said that every time a law is passed against a specific substance it is reformulated with different chemicals to maintain its intoxicating effect but to be a different compound. He said it is likely the state legislature will address the issue in the coming session and added that he is concerned about potential side effects of the chemicals as much as about the intoxication that results in using them.

Letcher County Coroner Marty Baker, who also works as a nurse at the Whitesburg hospital, told the court he has seen the effects of the synthetic marijuana in the emergency room and that they can be extreme. Baker said the patients he has seen are usually in their teens and are extremely disoriented with other troubling symptoms. He said the drugs do not show up on drug screens so it is difficult for health care providers to know what they are dealing with.

Baker said emergency room workers have seen those under the effect of the drugs exhibit symptoms from hallucinations to seizures and that it tends to raise blood pressure and increase heart rates. He also said that many users become incoherent.

“People are driving on it,” said Baker. “We haven’t had any fatalities yet but we’re asking for it.”

Webb said the Mayking business advertises on Facebook and keeps a list of its products on the outside of the building near a window that Webb said is open 24 hours a day, seven days a week.

Letcher County Judge/ Executive Jim Ward said that when Webb approached him he asked the sheriff to work with Letcher County Attorney Jamie Hatton to develop an ordinance. Ward said he will call a special meeting of the fiscal court for the second and final reading of the ordinance. The ordinance would then have to be advertised for three week before it becomes a law.

Hatton conducted the first reading of the five-page ordinance, which says that the products in question “provide a marijuana-like high when smoked and have become increasingly popular, particularly among teens and young adults.”

The ordinance also identifies specific ranges of “cannabinoids” that have numerous compounds within them, including AM Cannabinoids, CP Cannabinoids, HU Cannabinoids, and JWH Cannabinoids. The ordinance also identifies sellers broadly as persons, firms, groups, associations, organizations, partnerships, businesses, trusts, corporations, limited liability companies, or other business entities. Penalties for possession would be prosecuted as a Class B misdemeanor (a fine not to exceed $250 and jail time not to exceed 90 days) and penalties for trafficking would be prosecuted as Class A misdemeanor ($500 fine and up to a year in jail).

On Dec. 9, just hours after the Oak Grove ordinance took effect, Christian County Circuit Judge Andrew Self signed a preliminary injunction keeping Oak Grove from enforcing its new law because it is too broad.

The Kentucky New Era reported that a request for relief filed by owners of a store which operated under the name The ToyBox asserts the state legislature has reserved the power “to create and define criminal offenses” and that the Oak Grove ordinance “sweeps substantially broader” than state legislation.

The Rowan County ordinance is based on similar laws passed in West Virginia and Pennsylvania, and was developed after officials consulted with the Kentucky Regional Poison Control Center to identify and describe the chemicals and effects of the synthetic drugs, reported The Morehead News. Rowan County Judge/Executive Jim Nickell sent copies of his county’s ordinance to other fiscal courts in Kentucky.

In Chicago this week, a new law went into effect under which businesses selling the products will face fines from $500 to $1,000 and could have their business licenses revoked.

While some researchers oppose criminalizing the compounds because it could slow research on possible pharmaceutical uses against disease, the U.S. Drug Enforcement Agency

(DEA) took emergency action to categorize them alongside heroin as Schedule I drugs.

Max Dobner, of Aurora, Ill., died June 14 after smoking what he thought was a safe product, said his mother, Karen Dobner. He suffered a panic attack and crashed his car into a house. The Chicago ordinance is named Max’s Law in his honor.

“ He went to the mall one day with his friend. They saw this stuff and (the friend) said they had a conversation that it must be safe because it’s legal,” Karen Dobner said. “His conclusion was wrong.”

At least 40 states including Kentucky have passed laws or written departmental rules to ban synthetic marijuana, according to the National Conference of State Legislatures.

In March, the DEA took emergency action to control five chemicals used in making synthetic marijuana, citing an imminent threat to public safety. The DEA’s action made the substances illegal for a year, with a possible six-month extension, while federal health officials study them and make recommendations.