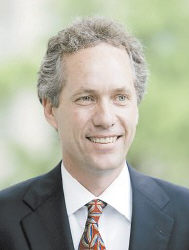 Louisville millionaire Greg Fischer got his start in the business world by developing an innovative way to chill drinks.

Now moving into politics, the soft-spoken Democrat wants to have the same effect on his opponents in a race for U.S. Senate.

A newcomer to politics and an underdog heading into the May 20 primary election, Fischer is bringing the same drive to his campaign that helped him to build a global company around a combination ice and beverage dispenser that he and a colleague developed 25 years ago. That drive is showing up on statewide TV where Fischer is bombarding Democrat Bruce Lunsford with attack ads.

Sitting at a small table outside his Louisville campaign headquarters, Fischer, 50, defends his advertising strategy, saying the TV spots raise legitimate issues that would likely be exploited by the Republican incumbent, Senate Minority Leader Mitch McConnell, if Lunsford wins the Democratic nomination from among a crowded field.

“I am an inherently positive person,” Fischer said, “but I’m in this race to win.”

A Vanderbilt Universitytrained economist, Fischer knows the odds of outdistancing the better-known Lunsford, also a Louisville millionaire, to win the Democratic nomination are long. But Fischer established himself as a serious contender by raising more money than Lunsford in the first quarter of this year.

Finance reports filed with the Federal Election Commission show Fischer took in more than $1 million through March, compared with Lunsford’s $825,000.

“One of the big questions people had was can that person raise money and be a legitimate candidate,” Fischer said. “I think the numbers speak for themselves.”

Longtime friend Tom Kayrouz, a Virginia physician, describes Fischer as an “industrious” man who looks at challenges from all sides, develops a strategy, then puts all his effort into achieving his goals, whether personal, business, or, now, political.

Kayrouz said Fischer has never shied away from difficult tasks. Instead, he relishes them, Kayrouz said, pointing to Fischer’s tendency to work in some tough jobs during college breaks, instead of vacationing like other students.

One of those jobs, Kayrouz said, took Fischer to Alaska to work at sea ports unloading ships.

Fischer and Lunsford are among seven candidates seeking the Democratic Senate nomination in the primary. Other Democrats in the race are Michael Cassaro of Louisville; David Wylie of Harrodsburg; David L. Williams of Glasgow; James Rice of Campbellsville; and Kenneth Stepp of Manchester.

Ignoring all but the best known, Fischer is lambasting Lunsford for long-ago business dealings in one of his latest ads. That ad raises an issue that has been troublesome for Lunsford in two gubernatorial campaigns in 2003 and 2007 – the failure of a nursing home company that he founded in the 1980s. An elderly woman in the ad charges that Lunsford evicted poor residents from his nursing homes.

In the ad, the woman says Lunsford is “the last person in the world I’d want in the Senate.”

Fischer’s ad drew sharp criticism from some leading Democrats, including former Gov. John Y. Brown Jr. who said it gave “an untruthful and misleading impression” of Lunsford who served as commerce secretary in the Brown adminstration. Fischer’s father, George Fischer, served as secretary of Brown’s cabinet.

“It is just not right that politics tolerates this type of slander and encourages the opposition to tear the opponent down regardless of the truth,” Brown wrote in a letter.

The Lunsford campaign asked television stations to pull the “scurrilous advertisement” that “seeks unfairly to impugn the character” of Lunsford. Spokeswoman Allison Haley said the isolated evictions at a few nursing homes did not reflect company policy and that Lunsford dealt promptly with the matter when he found out.

“We call it a truth ad,” Fischer said. “We’re not attacking Bruce. We’re not impugning his character. We’re addressing his record. We certainly know that Mitch McConnell will be taking a hard look at everybody’s records as well. It’s best that it be done in the primary.”

McConnell is seeking a fifth Senate term and has only one opponent in the GOP primary, truck driver Daniel Essek. McConnell raised an additional $1.3 million in the first three months of the year, lifting his total to $12.2 million for the campaign.

Fischer said Democrats need to field a candidate who is “a clear contrast” to McConnell.

“I’m a candidate with clean business record and a clean political record, so we believe that’s a better contrast to Mitch McConnell,” he said. ”

Fischer said he entered the Senate race because he was fed up with career politicians who appear unable to solve the problems facing the country. He said he felt outraged by their handling of international affairs, and especially by “the big mistake we made going into Iraq.”

“As I tell my children, ‘If you’re going to complain about something, you’d better be ready to do something about it,'” he said. “I’m running because I’m trying to get some common sense back into Washington. So many of the problems that we’re facing right now are big problems, and they’re big problems because our leadership didn’t take care of them when they were small problems.”

Longtime employee Keith Williams said Fischer has a genuine appreciation for the working class, and has always insisted that his firms treat the employees with utmost respect.

Williams, who rose through the ranks in Fischer companies, said he nearly missed that opportunity after interviewing for a job in the ice/beverage company called SerVend. The personnel manager, after interviewing Williams, threw his resume in the garbage can, thinking he wasn’t right for the job.

Fischer, however, recognized his potential and hired him.

“Greg dug me out of the trash,” Williams said with a laugh.