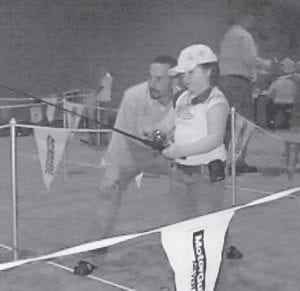 FISHING COMPETITION – Katie Braswell participates in the 2008 Bassmaster CastingKids competition at the Bassmaster Classic in Greenville, S.C. She is the granddaughter of Bill and Mae Whitaker of Whitesburg.

In 1991, the Bass Angler Sportsmen’s Society (BASS) developed the Bassmaster CastingKids program for children, which is similar to the NFLpunt, pass and kick events. In CastingKids, the challenge is to flip, pitch and cast a hookless lure to a bull’seye target. Mastering these three techniques will give anglers the skills they need to present any lure and catch bass. Scoring is based on a points system so the young angler with the most points wins. To date, nearly two million children have been awarded more than $3 million in awards, prizes and scholarships. The Bassmaster CastingKids program is the most successful youth fishing program in the world. 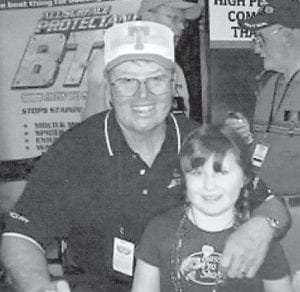 The first BASS Federation Nation divisional of the year typically takes place in March or April with the remaining five divisional competitions taking place throughout spring and summer. From the six divisionals, only the top 12 contenders advance to the CastingKids championship, held in conjunction with the BASS Federation Nation championship, typically in November. The championship contenders compete for $21,000 in scholarship money, with the winners earning the distinction as the best CastingKids in the sport and in their division. This qualifying ladder provides youth with a firsthand look at competition venues they can pursue when they reach adult competition age.