Several improvements are planned for Fishpond 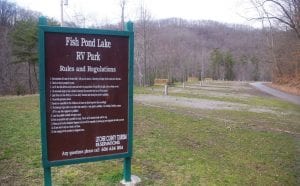 BIGGER CAMPERS — Bigger RVs will be able to park at Fishpond Lake after work with a $193,000 grant awarded to the county this week. Many other improvements are also planned for the recreational area at Payne Gap (Photo by Sam Adams)

The county received a Land and Water Conservation Fund grant of $193,318 for the work, but that must be matched dollar for dollar, said Brittany Back, who wrote the grant proposal. Since labor can count as the matching amount, the grant could provide nearly $400,000 in improvements to the lake and the surrounding park.

Missy Matthews, chairwoman of the Letcher County Tourism Commission, said the work should begin in the spring or summer and will bring much needed improvements to the lake. She said the commission is hoping much of the work will be donated by area businesses and individuals who want to see the park improved.

“If there is anybody out there that has a love for the park like we do who has equipment, employees, anything to help,” they should contact her, Matthews said.

The commission will also add fire pits and picnic tables at campsites all around the lake, and has already purchased new grills to replace ones that were rusted out. Some picnic tables were already covered with a separate $10,000 grant.

People who want to vacation at the lake will be able to do so with more comfort. The commission intends to build a complete bathhouse with showers and laundry facilities, and renovate or replace restrooms around the lake. Matthews said there will also be more utilitarian changes made to improve and protect water quality.

One of the biggest and most visible changes will be at the front of the lake where a caretaker’s trailer sits now.

“We’re looking for a log cabin,” Matthews said, adding that she’s not talking about a modern log house, but a traditional log cabin that could be dismantled, moved to the site and rebuilt.

The cabin will house a store and a rental shop where parkgoers can buy snacks, soft drinks, bait and ice, and rent fishing gear and kayaks.

The final part of the plan is a series of tiny houses that visitors who don’t want to camp on the ground can rent for vacation stays.

“It is our vision that there will be 10 tiny cabins tucked back into the woods,” she said.

Back said the work isn’t quite ready to begin. There are still “some hoops to jump through” for the grant, but all of that should be completed by summer at the latest.

The grant is the second major grant the tourism industry in Letcher County has received in the past six months. In September, the East Kentucky Heritage Foundation Inc., an offshoot of the tourism commission, received a $3.5 million Abandoned Mine Lands grant to begin work on a shooting and outdoor sports complex called “Thunder Mountain Resort” at the old Marlowe coal camp on Sandlick. That park is projected to employ 40-50 people and receive up to 40,000 visitors a year. The $3.5 million already awarded is expected to be just a tiny amount of the total needed to build the park, which will include sport shooting and firing ranges for skeet, trap, rifle, pistol, sporting clays, five-stand, archery and 3D archery as well as casting ponds, an obstacle course and a paintball course.

An open but inactive surface mine permit for part of that site has been closed out, and Matthews said there should be more work announced in the spring.