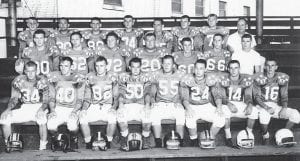 Dickie Barber from Logan, W.Va., and Donnie Browning, a guard from Fleming-Neon, were named the “Star of Stars” immediately following the game.

The starting lineup for the Kentucky team consisted of Rice, Johnson, Browning, Noble, Knight, Woods, Sheets, Conley, Justice, Patton and Elkins. This was a hard-fought game even though the Kentucky boys came up on the short end of a 26-6 loss.

According to Paul Sheets, the players were together for about two weeks for practice, which was conducted on the Belfry field. Different families in the community allowed some of the players to stay in their homes during this time and some of them stayed in the firehouse in Williamson.