Five-star recruit will ‘bring a lot’ to UK 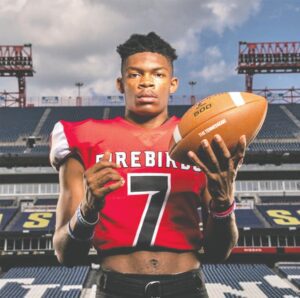 Five-star receiver Barion Brown of Nashville is a versatile athlete who might give a boost to UK’s offense next season. (Photo courtesy The Tennesseean, Nashville)

A few weeks back Kentucky coach Mark Stoops stressed the need to upgrade the overall receiving talent before next season. He certainly has kept his word with commitments from three-star speedsters Brandon White of Cincinnati and Jordan Anthony of Mississippi along with four-star Dane Key of hometown Lexington Frederick Douglass (who has 48 catches for 804 yards and seven scores going into the Class 5A title game this weekend against South Warren).

Kentucky also has a commitment from Syracuse transfer Taj Harris, who already has over 2,000 career receiving yards. 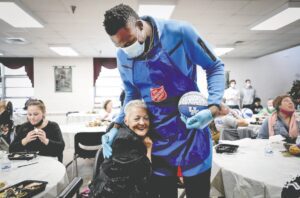 Oscar Tshiebwe might not have been beloved by West Virginia fans, but he has endeared himself to University of Kentucky fans with his play on the court and community service work like this visit to the Salvation Army in Lexington on Thanksgiving Day. (Chet White/UK Athletics Photo)

The 6-1, 173-pound Brown is a versatile athlete who has played quarterback, running back, receiver, defensive back and kick/punt returner. He has run the 100-meter dash in 10.49 seconds and 200 in 21.37, one reason many feel he could also be a big-time defensive back in college but he plans to be a receiver and UK recruited him to play that position.

He has not played in a sophisticated high school passing offense and has mainly relied on his superior athleticism to beat opponents, so honing his route running will be a priority as soon as he gets on campus.

“He’s going to bring a lot to Kentucky. He is a dynamic player and his stats won’t really show that because he had to play so many positions for us,” Brunetti said. “He can do a lot and his skill set level is really high. He has a chance to compete early at Kentucky if he gets in the weight room.

“He has to get stronger and trust the process in the weight room. He has been a track start and a lot of track coaches tell kids the weight room is not important and will slow them down. This senior year he has committed to the weight room but even now he is probably only playing at about 80 percent of his talent.”

Brown ran 62 times for 756 yards — 12.2 yards per carry — seven touchdowns. He had a long run of 92 yards. He had 25 catches for 372 yards and four scores. Brown averaged 57 yards per return on three kickoff returns and 8.2 yards on five punt returns. He even punted three times for a 35-yard average and made 27 tackles.

“He just had to do a lot for us,” Brunetti said. “He won’t have to do all those things in college.” s

How does Kentucky football coach Mark Stoops tune out social media and keep it from adding to the stress he already has, especially with the way his name has been mentioned with various other job openings recently?

“It’s easy for me as far as blocking it. It’s very difficult … nothing somebody says on social media or writes anywhere bothers me more than the pressure I feel in this building,” Stoops said. “This is my life. It affects everybody in our families. We live it.

“No offense, but I have zero pressure from outside. None. But internally your own frustration, disappointment, feeling like you could do better … that all comes internally. That is hard.”

Stoops says he stays “buried” in the football facility with his staff each week during the season.

“The outside world, a lot of times we have no idea what is going on,” Stoops said. “We are buried in here seven days a week. It’s pressure on yourself and what you want to deliver for yourself, your fans, for everybody.”

It’s sometimes amazing the way 5-9 Sahvir Wheeler can get to the rim and finish plays against bigger, stronger opponents.

Wheeler isn’t about to give away any secrets on how he does it, either.

“I think having an attack mentality, and playing with a team like this with great shooters, the lane is that much more open,” Wheeler said. “I think one of my gifts is being able to create for others and get inside of the paint at will. Guys like TyTy (Washington), Kellan (Grady), Dontaie (Allen) — those guys are threats.

“I think that’s a part of playing with guys who can make shots to spread the floor and using my advantages as my speed and my quickness. I’m at that point that if I’m by my defender, I’m playing two-on-one.

“It’s me, the rim, and the big man. Whether that’s Daimion (Collins), whether that’s Oscar (Tshiebwe), or whoever is down there playing the four, Keion (Brooks), it’s their man and me.”

Albany forward De’Vondre Perry found out how difficult it was to try and defend Wheeler.

“I told him after the game, Wheeler, if you continue to do what you do and be the player that you are, this team has a chance to really be special. If you try to listen to everyone else who is on the outside then you could really screw up what you guys have,” Driscoll said.

“The way he defends the ball at the point and the way he pushes the ball to the rim and puts pressure on you, it’s great to see, it’s exciting for these guys to see.” s

Anna Maria Tarullo thought Oscar Tshiebwe had a chance to be a special player at Kentucky after he transferred from West Virginia.

She had not covered him in person while she was sports director at WOWK-TV in Charleston, W.Va., before he came to WLEXTV in Lexington to co-host BBN Tonight with Keith Farmer.

“You could tell from our content (at WOWK) how joyous he was,” Tarullo said. “There were so many rumors about him being a bad personality fit at West Virginia and the fans are still so bitter about him. I am surprised they are not crying about missing him.

“He averaged almost a double-double there. His rebounding is phenomenal. But before he transferred there was all that chatter about him not being a personality fit. I don’t know who was on the wrong side of what there but he’s such a joy yet the West Virginia fans were brutal on him.”

Recently West Virginia coach Bob Huggins insinuated that Tshiebwe was not willing to work hard enough to play at West Virginia and took the easy way out by transferring. That certainly has turned into a blessing for UK because he’s become a sometimes dominant inside presence.

“I did the first sit-down interview with him when he arrived at Kentucky. I immediately had a soft spot in my heart for him,” Tarullo, a Louisville native, said. “I think he became my favorite Kentucky player after one interview. He’s right there with Chuck Hayes, Karl Anthony-Towns, DeMarcus Cousins. And it’s not just me. He’s a big-time fan favorite here no matter what those fans in West Virginia thought.” s

Kentucky commits Destin and Keaten Wade will be playing for the Tennessee Class 6A state championship Friday against Oakland at Finley Stadium in Chattanooga. The Wades, both Kentucky commits, helped Summit High School win the title in 2020 after losing in the state title game in 2019.

Oakland, also 14-0, is led by running back Jordan James, a Georgia commit. He has rushed for 1,293 yards and 22 touchdowns games while averaging 9.2 yards per game.

Quarterback Destin Wade has rushed for 2,144 yards and 29 scores while averaging 12.6 yards per rush. He has completed 71 of 117 passes for 1,299 yards and 17 scores. Keaten Wade has rushed for 547 yards and six scores along with nine catches for 152 yards and three scores. Defense is Keaten Wade’s forte and the linebacker has 72 tackles, including 20.5 for loss, along with two interceptions (he returned one 99 yards), six fumble recoveries and four caused fumbles.

The Wades and James are the Class 6A Mr. Football finalists. s

She not only was joining a national championship team, but she was going to be replacing the national player of the year.

University of Kentucky freshman setter Emma Grome admitted it was “definitely tough” early in the year when she took over the position Madison Lilley filled for four years and led UK to its first national championship in April.

“I think for myself and our team there has been so much growth this year that it has been incredible,” Grome said. “We have gotten a little bit better every day with our focus and consistency. We are getting to an elite level but I think we have more potential than we have shown so far.

“I’ve had to work on a lot of things to get to a level that I wanted to be at but one of the nice things about this team was everyone was super helpful to me. I worked on consistency with my hitters. It was a whole group of hitters I had never set before and we got extra reps all we could. I appreciate my team having confidence in me to help get me to where I am now.”

Where she is now is Southeastern Conference Freshman of the Year as she joins Sarah Rumley (2006), Leah Edmond (2016), Madison Lilley (2017) and Alli Stumler (2018) as Cats to earn this honor. She was also named to the all-SEC team and SEC allfreshman team.

Kentucky (24-4, 17-1 SEC) will host first- and second-round games in the NCAA Tournament this weekend. s

Quote of the Week: “I did not even see him coming to be honest. Like come on man, you can’t do that to me!” Oscar Tshiebwe on freshman teammate Daimion Collins jumping over him to grab a rebound against North Florida.

Quote of the Week 2: “I’m fine with my position right now. I just want to keep getting better and when my number’s called, be ready,” UK freshman Bryce Hopkins on his playing status.

Quote of the Week 3: “I really wish we could’ve seen him in the tourney with Immanuel Quickley and Nick Richards. He really rises to the occasion, and I think he would’ve flourished on that big stage. He’s certainly doing that now,” NBCS sports anchor Amy Fadool Kane, a UK graduate, on Philadelphia 76ers guard Tyrese Maxey.