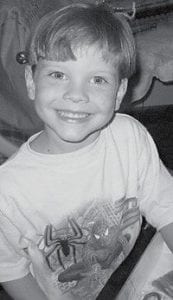 FIVE YEARS OLD – Prince Johann Elias Miranda celebrated his fifth birthday June 7 at Tweetsie Railroad. He is the son of Andy and Yo Miranda. His grandparents are Tiny and Ronnie Creech of Partridge, and Deborah Miranda of Thornton. His great-grandmothers are Norma Rhymer and Ruby Caudill.