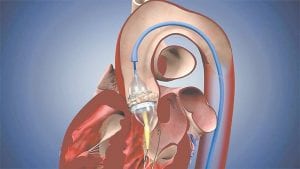 The above image provided by Edwards Lifesciences shows a graphic of the Edwards SAPIEN valve. A long-awaited study suggests that many people with bad aortic valves can have them replaced through a tube into an artery instead of openheart surgery. Edwards Lifesciences Corp. is seeking federal approval for its experimental SAPIEN aortic valve (shown in photo at left), implanted through an artery. (AP Photo)

Cardiologists are reporting a major advance: A longawaited study suggests that many people with a bad aortic valve, the heart’s main gate, can avoid open-heart surgery and have a new one placed through a tube in an artery instead.

There is a downside — a higher risk of stroke — and uncertainty about how long these valves will last.

Still, doctors predicted that if the new valve wins federal approval, patients would embrace it as they did balloon angioplasty, which has allowed millions to have clogged arteries fixed without an operation.

“ The fact that it’s not open-heart surgery sells itself, and the rest gets lost in the mix,” said Dr. Craig Smith, heart surgery chief at Columbia University and New York-Presbyterian Hospital.

He led the study and gave results earlier this week at an American College of Cardiology conference in New Orleans.

Dr. Michael Crawford, chairman of the meeting and cardiology chief at the University of California, San Francisco, called it “a historic event” that would dramatically change practice. “As good as surgery is, patients just don’t want it,” he said. 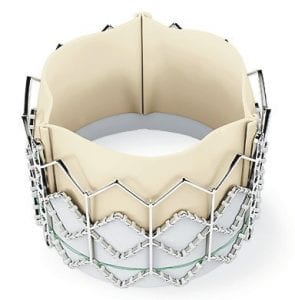 The aortic valve can stiff- en and narrow with age, making the heart strain to push blood through it. Severe cases are treated with surgery to replace the valve, but that’s risky for many older people who have this problem. Without an operation, half die within two years.

The study tested a way to wedge in a new valve without surgery. Dr. Edward McNulty, a cardiologist at the University of California, San Francisco, explained how it works:

Through an artery in the groin or the chest, “a new heart valve is literally crimped on a balloon and advanced across the narrowed, older, diseased heart valve. The balloon is inflated and the new valve left in place.”

A test of this gentler approach in people too sick for surgery found it greatly improved survival, doctors reported last fall. The new study involved nearly 700 people eligible but at high risk for surgery.

Their median age was 84, and they were randomly assigned to get valves replaced through surgery or the new way. Here’s how much people dread this operation: 28 people withdrew from the study or refused treatment once they learned they had been placed in the surgery group.

In the end, both groups did very well.

However, strokes and other neurological problems were twice as common in the artery-treated group — 8 percent versus 4 percent. Previous studies also found more strokes with the artery approach.

Other complications were a trade- off: Major bleeding and new cases of a fluttering heartbeat called atrial fibrillation were more common after surgery; there were more bloodvessel problems with the artery approach.

Leakage was more common with the new-style valve, too, though doctors said that problem can get better with time.

“It will take longer to figure that out,” Smith said.

The valve’s maker, Edwards Lifesciences Corp. of Irvine, Calif., paid for the study, and some researchers consult for the company. Edwards is seeking federal approval to sell the valve for inoperable patients now, and plans to ask the same for less ill patients like those in the new study in a few months.

The company plans to charge $30,000 for the valve, which is already used in Europe. Another study presented this week on the first group of patients treated with it — those too sick for surgery — put the total cost with doctor fees and hospitalizations at $73,563.

However, in those patients, it proved cost-effective — costs were higher for hospitalizations of people who did not get new valves.

Doctors caution that these are only one- year results, and it will take at least five years of study to know whether these less invasive treatments will be as good as surgically implanted valves that typically last 20 years.

Having this option available for people too sick to have surgery would be great, but it’s too soon to say if it should be used in less sick patients, said Dr. Elliott Antman, a Brigham and Women’s Hospital cardiologist and American Heart Association spokesman.

Yet there is a big unmet need — about 30 to 40 percent of people with very bad aortic valves are not being referred for surgery now, “and not all of them are patients that are inoperable,” said Dr. Ralph Brindis, a California cardiologist who is president of the cardiology college.

Charles Cohen, who will be 90 in August, got an artery placed valve two years ago at Cedars-Sinai Medical Center in Los Angeles, where he lives, as part of the study.

“I was a little bit leery” of either option, but was hoping for the catheter. Before he had it, he could walk only a block or so before having to stop to rest. “Now I walk half a mile,” he said.