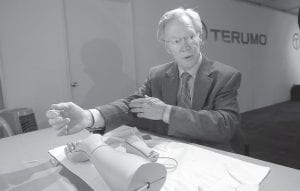 Atlanta cardiologist Dr. Spencer King demonstrated how doctors can open blocked heart arteries by going through an arm, using a model. A Japanese company, Terumo Corp., is one of the leaders of a new way to do it that is easier on patients — through a catheter in the arm rather than the groin. (AP Photo)

Have a heart problem? If it’s fixable, there’s a good chance it can be done without surgery, using tiny tools and devices that are pushed through tubes into blood vessels.

Heart care is in the midst of a transformation. Many problems that once required sawing through the breastbone and opening up the chest for open heart surgery now can be treated with a nip, twist or patch through a tube.

These minimal procedures used to be done just to unclog arteries and correct less common heart rhythm problems. Now some patients are getting such repairs for valves, irregular heartbeats, holes in the heart and other defects — without major surgery. Doctors even are testing ways to treat high blood pressure with some of these new approaches.

All rely on catheters — hollow tubes that let doctors burn away and reshape heart tissue or correct defects through small holes in blood vessels.

“This is the replacement for the surgeon’s knife. Instead of opening the chest, we’re able to put catheters in through the leg, sometimes through the arm,” said Dr. Spencer King of St. Joseph’s Heart and Vascular Institute in Atlanta. He is former president of the American College of Cardiology. Its conference earlier this month featured research on these novel devices. 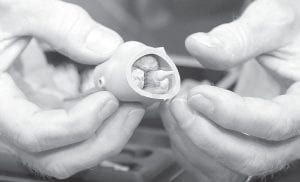 Atlanta cardiologist Dr. Spencer King demonstrated how a catheter is used to repair a diseased heart valve recently at an American College of Cardiology conference in San Francisco. Many problems that used to require openheart surgery now can be treated with minimally invasive procedures. (AP Photo/Jeff Chiu)

“Many patients after having this kind of procedure in a day or two can go home” rather than staying in the hospital while a big wound heals, he said. It may lead to cheaper treatment, although the initial cost of the novel devices often offsets the savings from shorter hospital stays.

Not everyone can have catheter treatment, and some promising devices have hit snags in testing. Others on the market now are so new that it will take several years to see if their results last as long as the benefits from surgery do.

But already, these procedures have allowed many people too old or frail for an operation to get help for problems that otherwise would likely kill them.

These methods also offer an option for people who cannot tolerate long-term use of blood thinners or other drugs to manage their conditions, or who don’t get enough help from these medicines and are getting worse.

For patients, this is crucial: Make sure you are evaluated by a “heart team” that includes a surgeon as well as other specialists who do less invasive treatments. Many patients now get whatever treatment is offered by whatever specialist they are sent to, and those specialists sometimes are rivals.

“We want to get away from that” and do whatever is best for the patient, said Dr. Timothy Gardner, a surgeon at Christiana Care Health System in Newark, Del., and an American Heart Association spokesman. “There shouldn’t be a rivalry in the field.”

Here are some common problems and newer treatments for them:

Millions of people have leaky heart valves. Each year, more than 100,000 people in the United States alone have surgery for them. A common one is the aortic valve, the heart’s main gate. It can stiffen and narrow, making the heart strain to push blood through it. Without a valve replacement operation, half of these patients die within two years, yet many are too weak to have one.

“Essentially, this was a death sentence,” said Dr. John Harold, a Los Angeles heart specialist who is president of the College of Cardiology.

That changed just over a year ago, when Edwards Lifesciences Corp. won approval to sell an artificial aortic valve flexible and small enough to fit into a catheter and wedged inside the bad one. At first it was just for inoperable patients. Last fall, use was expanded to include people able to have surgery but at high risk of complications.

Gary Verwer, 76, of Napa, Calif., had a bypass operation in 1988 that made surgery too risky when he later developed trouble with his aortic valve.

“It was getting worse every day. I couldn’t walk from my bed to my bathroom without having to sit down and rest,” he said. After getting a new valve through a catheter last April at Stanford University, “everything changed; it was almost immediate,” he said. “Now I can walk almost three miles a day and enjoy it. I’m not tired at all.”

“The chest cracking part is not the most fun,” he said of his earlier bypass surgery. “It was a great relief not to have to go through that recovery again.”

Catheter-based treatments for other valves also are in testing. One for the mitral valve — Abbott Laboratories’ MitraClip — had a mixed review by federal Food and Drug Administration advisers this week; whether it will win FDA approval is unclear. It is already sold in Europe.

Catheters can contain tools to vaporize or “ablate” bits of heart tissue that cause abnormal signals that control the heartbeat. This used to be done only for some serious or relatively rare problems, or surgically if a patient was having an operation for another heart issue.

Now catheter ablation is being used for the most common rhythm problem — atrial fibrillation, which plagues about 3 million Americans and 15 million people worldwide. The upper chambers of the heart quiver or beat too fast or too slow. That lets blood pool in a small pouch off one of these chambers. Clots can form in the pouch and travel to the brain, causing a stroke.

Ablation addresses the underlying rhythm problem. To address the stroke risk from pooled blood, several novel devices aim to plug or seal off the pouch. Only one has approval in the U.S. now — SentreHeart Inc.’s Lariat, a tiny lasso to cinch the pouch shut. It uses two catheters that act like chopsticks. One goes through a blood vessel and into the pouch to help guide placement of the device, which is contained in a second catheter poked under the ribs to the outside of the heart. A loop is released to circle the top of the pouch where it meets the heart, sealing off the pouch.

A different kind of device — Boston Scientific Corp.’s Watchman — is sold in Europe and parts of Asia, but is pending before the FDA in the U.S. It’s like a tiny umbrella pushed through a vein and then opened inside the heart to plug the troublesome pouch. Early results from a pivotal study released by the company suggested it would miss a key goal, making its future in the U.S. uncertain.

Some people have a hole in a heart wall called an atrial septal defect that causes abnormal blood flow. St. Jude Medical Inc.’s Amplatzer is a fabric-mesh patch threaded through catheters to plug the hole.

The patch is also being tested for a more common defect — PFO, a hole that results when the heart wall doesn’t seal the way it should after birth. This can raise the risk of stroke. In two new studies, the device did not meet the main goal of lowering the risk of repeat strokes in people who had already suffered one, but some doctors were encouraged by other results.

The original catheterbased treatment — balloon angioplasty — is still used hundreds of thousands of times each year in the U.S. alone. A Japanese company, Terumo Corp., is one of the leaders of a new way to do it that is easier on patients — through a catheter in the arm rather than the groin.

Newer stents that prop arteries open and then dissolve over time, aimed at reducing the risk of blood clots, also are in late-stage testing.

About 75 million Americans and 1 billion people worldwide have high blood pressure, a major risk factor for heart attacks. Researchers are testing a possible long-term fix for dangerously high pressure that can’t be controlled with multiple medications.

It uses a catheter and radio waves to zap nerves, located near the kidneys, which fuel high blood pressure. At least one device is approved in Europe and several companies are testing devices in the United States.