Fixing up homes of seniors enables them to age in place 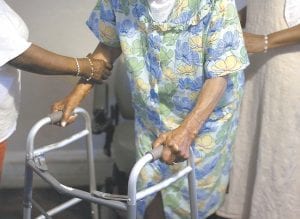 A woman who suffers from Parkinson’s disease is assisted by her daughter and an occupational therapist in her home in Baltimore. Days earlier, the 84-yearold fell while eating, sliding off her kitchen chair. On most days she wobbles into a bathtub with no grab bar. Her feet catch on damaged floor tiles. Part of the banister she needs to steady herself on the stairs has pulled out of the wall. (AP Photo)

Alberta Hough struggles to feed herself a snack, her arms shaking badly from Parkinson’s disease. Days earlier, the 84-year-old fell while eating, sliding off her kitchen chair.

The rest of Hough’s day isn’t much easier to navigate. She wobbles into a bathtub with no grab bar. Her feet catch on damaged floor tiles. Part of the banister she needs to steady herself on the stairs has pulled out of the wall. At the back door, a rickety wooden ramp no longer supports the scooter that helps her get around.

The environment in which you live can be as disabling as a disease, and too often, older Americans wind up in a nursing home not because they’re supersick but because they can’t get through their days safely at home.

Now a major research project will bring handymen, occupational therapists and nurses into the homes of 800 low-income seniors in Baltimore to test if some inexpensive fix-ups and strategies for daily living can keep them independent longer, and save millions in taxpayer dollars spent on nursing home care.

“ Very small changes can make a big difference,” said Sarah Szanton, a Johns Hopkins University associate nursing professor who leads the project. “We’re not saying, ‘What’s your blood pressure?’ We’re focusing on function: What do they want to do?”

Losing independence is a leading fear as people age. But a recent poll shows that too few comprehend the changes in lifestyle needed to offset the chronic illnesses and gradual slowdown that hit just about everyone in the 70s, 80s and beyond.

Asked about their choice of living situation when they’re older, Americans 40 and over say their top priorities are a one-level home with no stairs, that’s close to their children and medical care, according to the poll by the AP-NORC Center for Public Affairs Research.

Chances are, that won’t be enough.

For Hough, No. 1 is feeding herself without everything tumbling off the fork.

Hough’s other priority is not falling, and stairs are just one of her home’s hazards.

To Hopkins’ Szanton, bridging the gap between what older adults are able to do and what their homes allow them to do is key to maintaining independence.

The Capable study aims to prove how. During 10 home visits over four months, the Hopkins team is tailoring interventions — including about $1,100 in home repairs or modifications provided for free — to help low-income seniors who are having trouble caring for themselves.

Drills buzzed in Hough’s house as carpenters installed a new banister and added grab bars and a raised toilet seat in the bathroom. They replaced patches of flooring to prevent trips and prepared to tackle the ramp.

As for eating, Evelyn- Gustave recommended a little-known tool: utensils and cups that are specially weighted to counter Hough’s tremors.

“It’ll be easier for you to hold,” she promised.

The set of utensils costs only about $20, one of the affordable tips the study is generating. Hough’s daughter had thought the only solution was an aide to feed her mother, which the older woman hates.

“I always said I wouldn’t let my mom go to a nursing home,” said Gloria J. Hawks, 66, who is determined to care for her mother in the house the two share.

The Capable project — it stands for Community Aging in Place, Advancing Better Living for Elders — is being closely watched by Medicaid officials in other states as a way to coordinate care and improve the functional problems that lead to pricey, and sometimes preventable nursing home admissions. Today, it’s difficult for Medicaid patients to get these services.

With more than $8 million in research money from the National Institutes of Health and the Centers for Medicare and Medicaid Services, the project goes beyond home repair for health. It starts with a fullscale assessment of each participant’s needs.

In one home, a Hopkins nurse discovered that an 82-year-old woman was taking all of her 26 daily medications at once instead of staggered throughout the day, leaving her disoriented and sedentary until she became too weak to get out of bed without help.

First the nurse fixed the medication schedule. Then the occupational therapist taught the woman legstrengthening exercises and installed $30 steel risers to make it easier for her to get in and out of bed. Add new banisters, and soon she was moving around on her own.

Whether it is the cost or emotional ties, many people grow old in the same home where they spent their younger, more agile years. An AARP survey in 2010 found nearly 90 percent of seniors wanted to remain in their current home for as long as possible.

Yet government figures show nearly 1 in 5 seniors living in the community have trouble with at least one activity of daily living, such as walking or bathing.

Those physical limitations become more difficult with doorways too narrow for walkers, toilets that are lower than chairs, and kitchen counters too tall to sit while cooking. Plus, nearly one-third of older adults experience a fall every year, and most who are injured fell inside the home, according to the Centers for Disease Control and Prevention.

“You don’t think about that stuff,” said Hattie Watties, who can’t imagine leaving her Baltimore home of 36 years, that’s near children and grandchildren. “You just do what you have to.”

For Watties, 74, that meant climbing onto kitchen counters to reach too-high cabinets. Steep, dark stairs to the basement laundry only had a partial railing, so she threw clothes down and inched her way after them.

In homes where it’s even darker, White sticks motionsensing lights by each step to show where to aim your foot. They’re less than $15 for a two-pack and run on batteries, so no rewiring is needed.

The work that perhaps has the biggest impact seen so far is a double railing for stairs lets people rest their weight on both sides.

The handymen, employed by the urban service corps Civic Works, also insist on installing carbon monoxide monitors, which have detected leaking gas stoves in some homes.

Do these solutions really save money?

The four-month intervention costs about $4,000 per participant, including the home modifications and specialists’ salaries. The average cost for nursing home care in the U.S. is $6,700 a month, so even a modest delay could add up fast. Szanton will track participants long term and, based on results from an earlier pilot test of 40 high-risk seniors, hopes to delay nursing home entry by up to a year in this frail population.