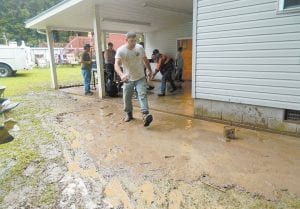 CHIPPING IN — Friends, neighbors and relatives helped clean floodwaters from the home of Johnny and Janet Napier of Little Cowan late Monday afternoon after flash flooding hit the community. (Photo by Caressa Maggard)

Preston Maggard was using a laptop computer in his grandmother’s living room when water pushed open a set of French doors and flood waters began gushing into the room. Janet Napier was in her kitchen putting away groceries around 3 p.m. on July 25 when water made its way into her house at Little Cowan.

Her husband, Johnny Napier, was on his excavator in the rain trying to dig a trench in the road at the end of their driveway, but didn’t have time to make a path before the water forced its way in.

“It was at such a speed when it came in,” said Napier. “It came in full speed.”

Maggard, 12, was able to shut the doors, but damage was already done.

The electrical fireplace was destroyed. Water got into the heat pump and soaked the bottom of a couch.

Janet Napier said the water, which looked like ocean waves, gushed into her yard full speed for at least 30 minutes. She said water covered the front step to her porch. 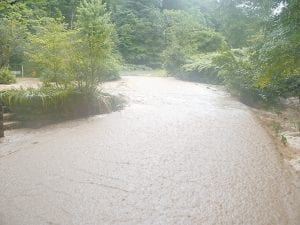 “I watched all of my flowers wash away,” she said.

Napier said her husband lost two pairs of work boots, but thinks her barbeque grill will be okay.

Family and neighbors quickly came to help the Napiers clean up the mess.

“They worked as hard as we did,” said Janet Napier. “They worked really hard trying to help us. I have awesome neighbors.”

Within an hour after the water stopped, with the help of friends and family all items in the living room were removed and the water was vacuumed up. Napier said she has mopped the ceramic tiles in her living room five times since the flood.

Napier said her living room, which served as a carport at the time, was flooded about seven years ago. Napier, along with neighbors and local politicians, blamed the construction work on US 119 as the cause of the first flood. A community meeting was held at a church at Little Cowan and check barriers were built along the ditches on US 119 to prevent a downpour coming straight down Pine Mountain. 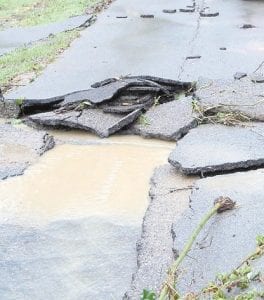 Letcher County Judge/ Executive Jim Ward said he was a magistrate when Little Cowan last flooded and said check dams were installed to slow down the water. Janet Napier said those barriers are now clogged and are most likely the reason for Monday’s flash flood.

“A lot of it comes all the way from the top of Pine Mountain with nothing to slow it down,” said Ward.

Ward said the Napier home was the only one he was aware of in which water entered a house on July 25. He said water went around several houses at Pert Creek, Little Cowan and Foot Hills. Some driveways were washed out.

Two culverts were replaced Monday at Pert Creek. Ward said he saw at least 15 locations at Little Cowan where water had gone onto the road. He said most of the damage at Little Cowan was on a state road. At one spot on KY 2035, pavement broke loose.

“The pressure of water got under the blacktop and more or less heaved it up,” said Ward. 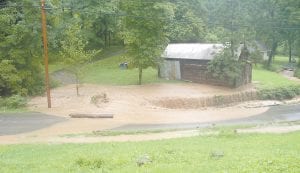 TOO MUCH TOO SOON — Rain fell fast and furious near the head of Little Cowan Creek on Monday, stopping up culverts and causing flood damages to roadways and at least one home along the way. (Photo by Brittney Bates)

Ward is still accessing the damage and said more culverts need to be fixed and more ditches will need to be cleaned out.

“I don’t want to be flooded again,” said Janet Napier.