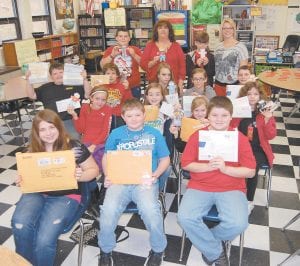 Students from Arlie Boggs Elementary School are learning about places scattered across the globe from people who live in these locations, thanks to a literary character named Flat Stanley.

In 1964, Jeff Brown wrote a book about a little boy named Stanley Lambchop who was flattened one night when a bulletin board fell on him while he was asleep. As a one-dimensional figure, Flat Stanley can travel to faraway places by lying in an envelope and using the U.S. Postal System as his gateway to adventure.

Twenty-eight fifth- and sixth-graders in Myrtle Boggs’s language arts and social studies classes have helped Flat Stanley explore communities that they are interested in learning more about. Although the class may not get to visit all of these places in person, letters that correspondents send back will give them a better idea of what goes on in those cities and towns.

Earlier in the semester, students made their own Flat Stanleys.

“We tried to make Flat Stanley look as lifelike as possible,” said Nicholas Sturgill, whose character went to Michigan to visit Nicholas’s relative. 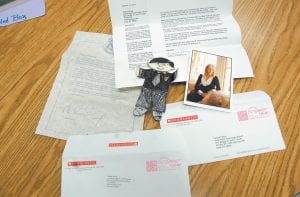 Teachers walked students to the local post office, which is located close to the school. Students learned how to correctly address envelopes, use the right amount of postage and weigh envelopes.

“I liked when I got to learn how to put a stamp on and see what it looks like inside of a post office,” said Kaitlyn Lane. “I had a really good time with it.”

Students mailed the paper dolls along with letters to friends and family members. Some letters were mailed to people who know Mrs. Boggs or are ABES alumni.

Each student sent at least one letter in mid-September. Some mailed letters to as many as five different people.

Included in the letters were instructions for the paper dolls to be mailed back to ABES after the Flat Stanleys spent time exploring the different communities and learned facts about those rural or urban areas.

Students asked letter recipients to mail maps, brochures and other information about their communities with Flat Stanley.

Students want to know about houses and schools in other areas as well as information about local climates, populations and crime rates. Types of wildlife, landforms and festivals in the communities where Flat Stanley visited were also of interest to students. They also want to know if factories, museums, parks or hospitals are located in those areas. Students are curious if famous people are from those areas or if landmarks are located in those communities.

“We tried to go as many places as possible,” said Mrs. Boggs.

Letters were not sent to the Southern Hemisphere, but Mrs. Boggs hopes that will change.

Mrs. Boggs received an email letting her know that Flat Stanley lost one of his arms while in Afghanistan, but a medic repaired it. He is on an active mission and will be unable to communicate for about two weeks.

Flat Stanleys came back to Eolia in early October. Three letters students received were from former Letcher County residents who moved within the last year to find employment after being laid off from jobs with coal and gas companies. Those letters came from Oklahoma, South Carolina and Colorado.

Nicholas said his favorite part of the project has been the anticipation of getting back letters.

“We’re really excited because we want to know what they wrote,” said Nicholas.

Flat Stanley has gone on numerous adventures including a trip to a dogsled park in Alaska.

“I learned that you might be paper, but you can do what you want,” said Hannah Boggs.

Hannah also sent a letter to her cousin who went on a cruise to the Bahamas.

“He fell off a cruise boat and they had to go get him,” said Hannah.

“It is really cool,” said Reaghan.

Reaghan had another Flat Stanley that went on a private airplane ride in North Carolina.

“There are a lot of animals down there,” said Megan McCown. “There’s a lot of farms there.”

Seth Terry received pictures of his one-dimensional figure standing near sites in Charleston, S.C. Flat Stanley saw where the first shots of the Civil War were fired in Fort Sumter. In another photograph, Flat Stanley stood in front of the Pineapple Fountain in Waterfront Park.

James Calton sent his Flat Stanley to his uncle in Alabama.

“He lives close to a bordering state,” said Colton, who looked at a map and figured out the nearby state is Mississippi.

Jane Goode, a former ABES teacher, provided students with information about Frazier, Mich. Goode taught at Eolia in 1967 and 1968. She retired from teaching first grade for 35 years at Walt Disney Elementary School.

Alaina Epling mailed one Flat Stanley and she decided to send him to her favorite author, J.K. Rowling. Epling even drew her paper doll to look like Rowling’s popular character, Harry Potter.

She received a form letter back from Rowling. A second letter she received was from Linda Schenker, a Scholastic Book Group employee, who told Alaina that Flat Stanley rode on a subway in New York City and saw The Lion King on Broadway. He also visited the Empire State Building, Lincoln Center and Central Park Zoo.

“I was very excited,” said Alaina. “My mom said she probably wouldn’t respond. I said we had to try.”

Not all of the Flat Stanleys have returned.

“I’m still waiting for the President to respond,” said Jacob Maggard. “I don’t think he will respond.”

Jacob did get a letter back from Kingsport, Tenn.

“I think his arm broke in travel,” said Jacob.

Mrs. Boggs said she received an email from a person in London, England who had been on holiday in the States and wanted to know if there was still time to write a letter.

Mrs. Boggs said the class will learn from Flat Stanley’s adventures whenever they receive letters back, regardless of how long it takes for a response.

“The kids love it,” said Mrs. Boggs. “The older kids want to do it. We try to have fun in class.”

ABES Principal Freddie Terry has ordered a large map so students can pinpoint and keep track of all of the places Flat Stanley has visited. Mrs. Boggs plans on putting the map on display in a hallway so all students in the school can look at it and learn from it. The school will continue to be a part of the Flat Stanley Project in coming years and will add new pins to the map as Flat Stanley travels to more places.

Students have enjoyed telling teachers, parents and others about letters they have gotten back. The Eolia postmaster keeps the mail for Mrs. Boggs’s class separate from the rest of the school’s mail. Once the letters are delivered to the school, someone in the front office walks the mail straight to Mrs. Boggs.

“Everybody got on board with it,” said Boggs.

To send a letter describing your community to ABES fifth- and sixth-grade classes, write to ABES, P.O. Box 86, Eolia, Ky. 40826.