Flaxseed no help for hot flashes 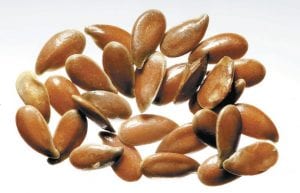 A rigorous study overseen by a doctor at Mayo Clinic has found that eating flaxseed does not control hot flashes in women going through menopause. (AP photo)

Women looking for a natural remedy for a common menopause problem have a disappointment: A new study has found that eating flaxseed does not curb hot flashes.

Hormone pills ease hot flashes, but they can raise the risk of breast cancer and are not safe for women who have had that disease. Flaxseed has weak hormonal effects, and doctors thought it might help.

Dr. Sandhya Pruthi of the Mayo Clinic decided to test this in a rigorous study after a patient said she thought flaxseed was helping her. Researchers enrolled 178 women who had at least 28 hot flashes a week. About half previously had breast cancer.

The women were given snack bars with or without flaxseed to eat once a day. After six weeks, a third of each group reported 50 percent fewer hot flashes, and all reported more bloating, diarrhea and nausea.

“This we suspect was due to the fiber content in the bars,” Pruthi said.

Women who don’t want to take hormones for menopause symptoms might consider certain antidepressants, such as Effexor, or other drugs such as Neurontin that well-done studies have shown can help, she said.

“There were so many testimonials that we thought flaxseed was going to work, but a testimonial is not a rigorous clinical trial result, and that’s what our patients deserve,” he said.

“Even natural products do have side effects,” so it’s important to test them in studies such as this one, he said.

The National Cancer Institute paid for the study. Results were reported Sunday at the American Society of Clinical Oncology conference in Chicago.