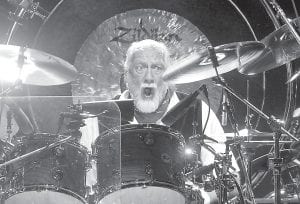 Drummer Mick Fleetwood (above) formed Fleetwood Mac with bassist John McVie in England in 1967. The band performed in Louisville in April. (AP photo)

“It’s been three years since we’ve been onstage together, (and) after all that time apart we come together and it’s different. Somehow we’ve grown. The context has changed and it’s kind of amazing that, with all this time, we would still be evolving on that level as a band.”

Lindsey Buckingham spoke the words above as he, Stevie Nicks (with tambourine in hand) and founding members Mick Fleetwood and John McVie shared the stage once again under the legendary name Fleetwood Mac to celebrate the 40th anniversary of the band’s 19-times platinum album Rumors. The show, which took place at The KFC Yum! Center in Louisville on April 11, was the fifth stop on their massive world tour that kicked off April 4 in Columbus, Ohio. Though Buckingham was right in saying the band had changed since its formation as a British blues band in 1967, Fleetwood Mac proved throughout this night that the changes have not been negative. 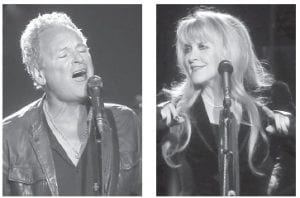 As the lights dimmed for the Louisville show and the now four-piece band took the stage, Buckingham’s voice was the first to speak, but only for the countdown to the first song on Fleetwood Mac’s 19-times platinum album Rumors, “Second Hand News.” The Mac then continued to play fan favorites that included “The Chain,” “Dreams,” “Rhiannon” and even a new song, “Sad Angel.” During the performance of these songs, vocalist Nicks performed her signature “whirlingdervish” stage moves to thunderous applause. Her dances were prevalent throughout the rest of the night and never failed to please the crowd.

Afterwards, Buckingham, the lead guitarist, once again took to the mic and began to discuss the group’s follow up album to Rumors, 1979’s Tusk. Discussing the album, Buckingham described it as “a line in the sand” to which the group continues to aspire. They then celebrated the album by playing “Not That Funny,” “Tusk,” “Sister of the Moon” and “Sara.” While performing “Sara,” Nicks and Buckingham (providing backing vocals) shared a microphone and then a small twirl together during an instrumental. This notion proved that despite their tangled past, the group members have no contemptuous feelings for one another.

After “Sara,” all band members except Buckingham left the stage. With a single spotlight only on him, he sang an acoustic version of “Big Love.” Next, Nicks, who joined the band with Buckingham in 1975, returned to the stage and brought the audience to its feet. Nicks then took a moment to dedicate one of the band’s most endearing songs, “Landslide” to the newly-crowned NCAA basketball champions, the Louisville Cardinals. After this song, the rest of the band reunited with Nicks and Buckingham on the stage to sing songs like “Without You” and “Gypsy.” Then a steady drum beat from founding member Mick Fleetwood and Nicks’s sudden change from black shawl into a gold one signified that it was time to play “Gold Dust Woman.”

Following “Gold Dust Woman,” the group played “I’m So Afraid,” “Stand Back” and “Go Your Own Way” before leaving the stage. Returning for their encore, the group played “World Turning” and “Don’t Stop” before taking what appeared to be their final bow of the night. After an earth shattering applause, however, the fans were rewarded with a second encore in which they were treated to the night’s final two songs, “Silver Springs” and “Say Goodbye.”

When the group took its second bow, it was followed by a sincere thank you by Nicks. “We always just want to let you know that you are so very kind and so very patient and you spent a lot of time here tonight,” she said. “That’s so special because, with all its might you guys are the dream makers, the dream catchers. You make it all happen, and you always have. So thank you for that!”

With that most of the group left the stage, Including Buckingham who had been there the entire night. The only remaining member was Mick Fleetwood, who founded the band in 1967 with bassist John McVie.

Fleetwood also thanked the crowd for making the night so great. As the crowd responded with endless cheering and applause, the mastermind of Fleetwood Mac joyfully danced off the stage, knowing that his band will always be growing and changing for the better.

Cassidy and Kennedy Breeding are nearing the end of their sophomore year at Letcher County Central High School.