Fleming-Neon comes together after flooding 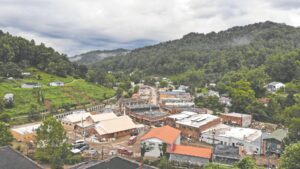 Thunderstorm clouds were rolling in over downtown Neon when this photo was taken Saturday, August 6. The area was among the worst-hit during the July 28 flooding. (AP Photo/Allen G. Breed)

As National Guard troops patrolled outside and volunteers on backhoes mounded up debris, J.R. Collins stood behind his barber chair, giving a touchup to one of his regulars. Like most in Fleming- Neon, Collins comes from a family built on mining — both his grandfathers worked in coal — and he has stayed in the close-knit town even as the industry shrank and others fled. Those who remain are determined to prove their community is about more than coal.

And they’ve come together to make sure Collins’s barber shop and other businesses reopen amid the devastating floods that have killed more than three dozen in eastern Kentucky.

“They were there with shovels and squeegees and water, and people packing, and kids helping,” Collins said above the din of air conditioning and a dehumidifier in his shop. “It’s good, hard-working people that like to help people out and got each other’s back.” 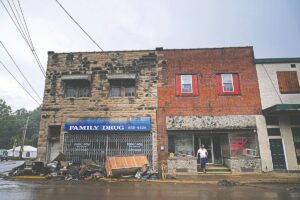 Fleming-Neon was once two towns: Fleming, a company town founded in the early 1900s by the Elkhorn Coal Corp. for the sole purpose of mining, and Neon, which became a center of commerce.

Fleming was run by Elkhorn and named for one of its executives. The company issued its own money, and workers used it for rent on company-owned homes and goods at the company store or local businesses. Neon was independent, a free town where U.S. government greenbacks, not company scrip, was legal tender — but it thrived off the glow of coal nearby.

Fleming and Neon prospered along with the company and industry. Dates still seen today on brick storefronts chronicle the boom years.

“We had department stores, we had grocery stores, we had restaurants, we had dry cleaners. We had a theater,” said Susan Polis, Fleming-Neon’s 73-year-old mayor. “You did not have to leave here to have, to get anything.” 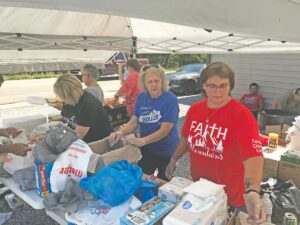 LENDING A HAND – Members of the Farmers Christian Church in Bath County, near Morehead, prepared some 18 large tins of spaghetti and meat sauce and brought to Letcher County to serve to residents of the Fleming and McRoberts communities August 6 at the Powerhouse Church of Jesus. Farmers Christian pastor Billy Noble attended Fleming-Neon High School. (Mountain Eagle photo)

But as the mines mechanized, the population shrank in Fleming as well as Neon. In the late 1970s, the former rival towns merged under one government in an effort to pool resources, but the bleeding continued.

Today, only about 500 people remain. And on July 28, the waters of Wright Fork rose, threatening further devastation for this valley of people who long extracted riches from the earth. But there’s a spark in Fleming-Neon that, so far, has refused to be extinguished.

A multipurpose center was set to open in a former car dealership about two weeks after the storm hit. Jeff Hawkins, a longtime educator who’s lived here since he was a teenager, said the project, dubbed Neon Lights, would include a performing arts studio, an internet cafe, event space, and an innovation incubator.

“We wanted a space for kids to be able to do physical activity, to dance, to sing, whatever it may be,” he said. “Upstairs, we would put a robotics lab and a computer coding lab.” 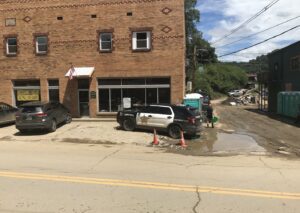 Jeff Hawkins (seen in photo at left) helps clean his father’s antique shop, called Curiosity Shop, in Fleming-Neon. When the storm hit, Jeff Hawkins was about two weeks from opening a multipurpose center in the building above. He has since let the City of Neon move into the space to use as a City Hall. The police car seen in the photo above is on loan from the Spartanburg, South Carolina Police Department. (Photos by The Associated Press (at left) and The Mountain Eagle (above).

That dream is not dead, just deferred. For now, the cleaned-up space serves as an emergency supply distribution center.

The rains came again this past weekend, prompting a brief evacuation Friday evening. But while some dreaded it, Emory Lee Mullins chose to see it as a blessing.

“It’s washing it off pretty good,” Mullins said, using a push broom to sweep the last of the creek silt into the gutter outside his flower shop. “Every little sweep gets it, don’t it?”

Five feet of water had all but gutted the Letcher Flower Shop, which Mullins bought 25 years ago. But as the rain fell, he ripped out sodden walls, confident he will reopen in a couple of weeks.

It’s been hard to break coal’s grip on these mountains, said Hawkins, describing a corporate strategy to “make as much money as you can and move on.” 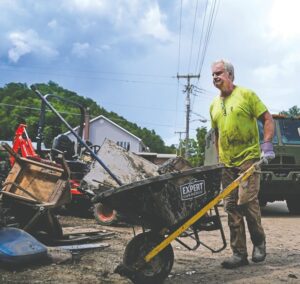 “For decades, money left here and was not reinvested here,” he said. “And that’s what we’ve been left with.”

But Fleming-Neon has also been left with a toughness. And for every story of tragedy, Hawkins said, there are six more of goodness and grace.

“The folks here, they persevere. They are resilient. They have grit,” he said.

The volunteers who’ve come from other states see that spirit, too. Ken Cagle, of North Carolina, said it makes him consider retiring here: “It’s just unbelievable, the people here, how they just want to help other people.”

And Hawkins intends to stay among them in these hills. He sees the flooding disaster as an opportunity to reinvent Fleming-Neon and eastern Kentucky.

“How do we reimagine what we can be?” he said. “And in a way that we’re not just surviving, but we’re moving to a point of thriving.”