Fleming-Neon escapes floods this time around 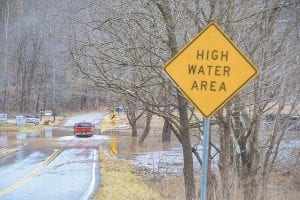 HIGH WATERS — A pickup truck passed through standing water on KY 7 at Blackey Sunday afternoon, a day after sustained rains drenched the region and resulted in numerous instances of flooding. (Photo by Chris Anderson)

While much of eastern Kentucky and southwestern Virginia have been inundated by flooding from heavy rains, the City of Fleming- Neon was relatively unaffected in the past week.

At the February meeting of the Fleming-Neon City Council, Mayor Susie Polis told the council that except for some problems with ditches that were full of debris, the city had avoided the flooding that at one time would have seen city streets running like rivers. She attributed it to work the city did on Abdoo Street and in other parts of town.

Fleming-Neon has a long history of flooding. One of the first articles The Mountain Eagle carried after Tom and Pat Gish took over publication of the newspaper concerned the 1957 flood, when floodwaters reached a depth of 39 feet in Hazard, 19 feet above flood stage. Many of that city’s businesses were under water for days, a number of homes near the river were flooded, and more than 50 houses were swept away.

According to a report prepared by the U.S Geological Survey, twelve and a half inches of rain fell between January 27 and February 1, 1957 in the headwaters area of the North Fork, the Middle Fork, and the South Fork of the Kentucky River. The heaviest flooding was in Kentucky, and roads, houses and towns running along the rivers and situated in the flood plain flooded so rapidly many of the residents were never warned because the rapid rise of the water so disrupted communications.

While Hazard was hardest hit, “damage was particularly notable,” in Whitesburg, Fleming-Neon, and Blackey, and 40 bridges were washed out in Letcher County. Areas adjacent to the many tributary streams in Letcher County were also flooded with heavy damage along Leatherwood Creek, Linefork, and Rockhouse Creek

Tom Gish wrote an editorial in the February 14, 1957 Mountain Eagle praising the Red Cross and stated that it should never have any trouble getting donations in Letcher County again due to its extraordinary efforts to help the people who were affected by the floods. Communications had been severely disrupted and the Red Cross used its facilities to carry messages between the Bank of Neon and its correspondent banks so checks could be cashed at Neon.

Polis told the council she has been out looking for possible problems in the city and that she has also talked to an independent contractor about cleaning ditches that need immediate attention. She added that at least one culvert will need to be replaced. Polis said that during the heavy rains, she received several phone calls asking how the city was doing, and had been happy to tell the callers the city was not flooding.

In other business, the council learned that some sewer customers who do not also purchase water from the city are delinquent in their accounts. Water Company Clerk Ellen Hampton told the council that since these customers don’t get their water from the city, they can’t discontinue water service when they get too far behind. She said one customer owes the city $800. and only pays $50 a month, which is not enough to keep the account even, so every month the customer gets about $20 more in the hole. Hampton added that sewer customers without water service pay a flat rate, but customers who purchase water from the city pay a rate based on the amount of water they use. The council voted unanimously to raise the payment to $100 a month so the account will get paid.

Water manager Chris Banks said that a similar situation had taken place earlier, and then-City Attorney James Craft had examined the water ordinance and found that the city can disconnect delinquent customers’ sewer lines and cap them if they do not pay their bills. Banks also reported that the city had an approximate loss of 24 percent of treated water in January, but said that due to ongoing renovation in the city water plant, the amount is not exact. He added that the city has not had severe problems during the flooding with broken lines or inundation.