Fleming-Neon grad is Division I coach 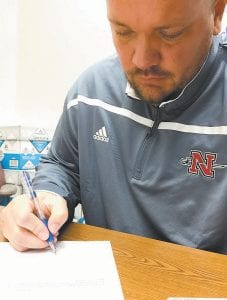 Matthew Taylor at work at Nicholls State University in Louisiana.

By now, most local sports fans know the story of Matthew Figger, the Jenkins native who was just named head basketball coach at Austin Peay University after helping coach the South Carolina Gamecocks to the Final Four in Phoenix earlier this month. What fans here may not know is that Letcher County has another “Matthew” coaching in Division I basketball.

He is Matthew Taylor, son of the late Ben Buster Taylor, the former sheriff of Letcher County and decorated Green Beret known for being part of the honor guard marching beside President John F. Kennedy’s coffin as it was carried on a horse-drawn caisson from the White House to the U.S. Capitol in November 1964. His mother, retired Fleming-Neon High School guidance counselor Ramona Taylor still lives at the family home in Millstone.

Matthew moved up to coaching in the NCAA’s top division in September 2016, when he was named director of operations at Nicholls State University in Thibodaux, Louisiana, about 60 miles southwest of New Orleans.

Taylor arrived at Nicholls State, which plays in the Southland Conference, after stints as head coach at St. Catharine College in Springfield, Ky., where he recruited and coached Ben Vozzola former NBA player for the Brooklyn Nets and current professional guard playing overseas, and head recruiting coordinator at NAIA powerhouse University of Pikeville.

At UPIKE, Taylor helped guide the Bears to back-to-back Mid South Conference Championships, as well as the program’s best single season in team history (31- 3). The two programs reached the postseason a total of three times with UPIKE making two appearances in the NAIA National Tournament, while St. Catharine made the tournament once. He also played a key role as an assistant coach/head recruiting coordinator at Union College (2009-10) and St. Catharine College (2010 and 2012).

In addition to recruiting Vozzola, Taylor has been responsible for signing 28 NCAA Division I transfers, including a national and co-national player of the year and three conference players of the year. Among the transfers, 25 went on to earn either all-conference and all-American recognition, highlighted by No. 1 one prospect Jamar “Deuce” Briscoe.

“I have known Matt for nine years and we worked together at the University of Pikeville. He brings a wealth of knowledge from his experience as a head coach at St. Catharine and I love the energy he is going to bring to our program,” Nicholls State head coach Richie Riley said at the time Taylor was hired there. “He is not only passionate about being the best coach that he can be, but also mentoring our student-athletes to be great both on and off the court. I have always considered Matt to be family and I am thrilled to have him on our staff.”

Before coaching at the college ranks, Taylor served as head coach of Caverna High School (Ky.) for one season. While there, he coached the nation’s leading scorer — Mr. Basketball runnerup Mason Faulkner, and guided the Colonels to a district championship. In 2005, Taylor directed Rowan County High School to its 16th regional championship and sweet 16 appearance.

An all-region basketball player at Fleming Neon High, Taylor continued his career at NCAA Division II University of Virginia-Wise where he played three seasons before transferring. He went on to graduate from Alice Lloyd College in 2004 with a bachelor’s degree in history. Taylor earned a master’s in education from Union College in 2011 and is currently pursuing a second master’s in business.

Taylor says he is proud of his Letcher County upbringing and brags about growing up in the mountains at every opportunity.

“Living in Letcher County my whole life to me has been one of the biggest advantages a person could ask for,” Taylor said. “Every day you see people in stores, at dinner, or in town who all put a full day’s work — most of the time in the coal mines or some other hard labor. Seeing that daily makes you realize what real hardworking people live in the mountains of eastern Kentucky.“

Added Taylor: “People always have this notion that if you aren’t from a big city somewhere that you have some sort of disadvantage, but I don’t subscribe to that notion. I believe I have an advantage growing up in the mountains, because it taught me to work hard. I don’t take days off, I don’t take anything for granted.”

Taylor is still chasing his dreams and believes Nicholls State will shock some doubters next season, especially after the Colonels defeated ACC team Boston College and Southern Conference power Samford this year. The Colonels won their largest number of games since 2008 this season, and are quickly turning around a program to make a run at the NCAA tournament.

No matter what comes next in his coaching career, Taylor says he’s “still Matthew from Millstone,” where he will spend most of the summer months.

“You won’t find me out partying or moving somewhere else, you’ll find me on Sundays at Pine Mountain Grill with my mom and brother talking about the journey we’ve been on or games we have won and places I am going soon,” he said. “My family means the world to me, closely followed by my home in the mountains. I wouldn’t trade Letcher County or being raised there for anything. I hope one day I can give back to the place that made me and holds a special place in my heart no matter where I go or what I do daily.”