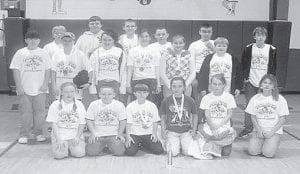 The Fleming-Neon Elementary School archery team won top honors when 100 middle school students competed January 10 in the first Winter Shootout. Students from Perry, Harlan and Letcher counties showed up to show off their skills with the stick and string. The competition, which was hosted by Leatherwood Elementary School, was part of the National Archery in the Schools (NASP) program, where thousands of children in Kentucky are learning how to shoot bows and arrows. The program has been featured on Kentucky Educational Television and the Outdoor Channel

The FNES team, which is in its second year of the NASP program, received the best overall score. In the middle school division, C.J. Phillips, an eighth-grader from FNES received the award for top male shooter. Jeremy Meade of FNES took home third place. Makaley Johnson, a sixth-grade student at FNES, received overall best female shooter.

FNES has 22 members on the archery team in grades six through eight. Students meet for practice at least two times weekly as part of the Letcher County Afterschool Prescription Drug Diversion Program. Their instructors are Jim McAuley and Roddy Craft.