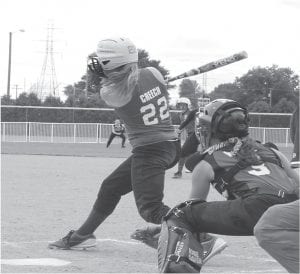 In the third, Missouri put two runners on with a single and an error, but couldn’t get them across. Whitney Creech led off the third inning with a single, followed by Lexi Stambaugh with a bunt single. Creech went to third and on the throw Stambaugh went to second. Creech scored on a fielder’s choice from Charity Niece, and Fleming-Neon took the 4-0 lead.

In the fourth inning, Lexi Stambaugh led off with a single and Charity Niece received a walk, and both runners stole second and third. Stambaugh stole home again to make the score 5-0 in the fifth.

In the sixth inning, Cheyanne Stidham singled, and Whitney Creech hit a home run to center. Lexi Stambaugh hit a double off the left field fence, moved to third and then scored on two passed balls to make a final score of 8-0.