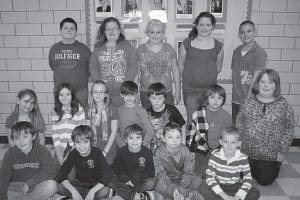 Fourth-grade students at Fleming-Neon Elementary School recently visited the Space Camp and Invasion of Mars Museum at the Challenger Learning Center in Hazard.

Students at Fleming- Neon Elementary attended the “Mars Invasion 2030 — From Coal Camp to Space Camp” at the Challenger Learning Center in Hazard in December. Teachers Linda Cantrell and Deana Napier led the expedition of 18 fourth graders on their Invasion of the Mars Museum.

The Mars Invasion program was created and developed through a partnership between the Challenger Learning Center of Hazard and CEDAR, Inc. (Coal Education Development & Resources) of Pikeville. The experience for the students was made possible through the sponsorship of Alpha Natural Resources of Wise, Va., which has operations in the Letcher County area.

The program shows how science, math and technology are connected in both space science and coal mining and how similar many of the job duties are for astronauts and coal miners.

In the classroom students participated in several activities. The unit began with a debate on the topic “Why go to Mars?” Students then used core samples made from Play Doh to examine what the Mars rovers might find on the planet. The class made the connection that coal samples are used to locate areas with enough coal, just as the rovers need to find an area that will supply enough water to sustain life.

Part two of the program focused on the importance of communication, habitat, and travel. The students built houses for the first explorers using recyclable materials. Included in the design were water and waste management areas, homes, green houses, and recreation.

In the final part of the program, the class became aware of the many jobs and professions that would be needed for a group to live on Mars. The first group was limited to seven people, then the students decided what skills they would need and how they would need to multitask until a larger colony could be built and more people arrived.

When the class visited the Challenger Learning Center’s Mars Museum, students were fitted with hard hats and data logs. They were prepared for challenges that would be realistic to space travel. Students then visited several learning pods to complete activities.

The class learned the connection that exists between the two very different professions. They realized the importance of safety, good communication and technology. They also saw how necessary listening, teamwork and education are to being prepared for a career.