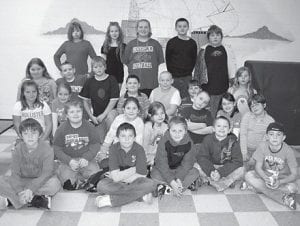 The program shows how science, math and technology are connected in both space science and coal mining, and how similar many of the job duties are for astronauts and coal miners.

The Mars Invasion was created and developed through a partnership between the Challenger Learning Center and CEDAR Inc. (Coal Education Development & Resources). Teachers are trained to use the program and students enjoy the experience.

In the classroom, students participated in several activities. They started the unit with a debate, “Why Go to Mars?” The debate will be broadcast on Letcher County Public TV. Students then used core samples made from Play Doh to examine what the Mars Rovers might find on the planet. The class made the connection that coal miners take core samples to locate areas with enough coal, just as the Rovers need to find an area that will supply enough water to sustain life. Part one of the unit ended by planning the trip when Mars will be closest to Earth, a short distance of 250 million miles.

Part two of the program focused on the importance of communication, habitat and travel and included an activity where the students were not allowed to speak but only use signals and gestures. The class found out how important clear communications are to successfully complete tasks in space and in mining. They then built houses for the first explorers, using milk cartons and other recyclable materials to build a colony. Included in the design were water and waste management areas, homes, green houses, labs and more. The students finished by designing a stylish ride for the Mars colonists.

The final part of the program was the most creative. The class became aware of the many jobs and professions that would be needed for a group to live alone on Mars. The first group was limited to seven people and the students decided what skills they would need and how they would need to multitask until a larger colony could be built and more people arrive. One class decided one colonist would need to be a hippie and possess the skills of a doctor, candymaker, chef and teacher. They thought this person would be good to schedule dances, music and other entertainment. The boys are still trying to modify the game of football for Mars. Making the ball very heavy may be the only way to keep it from floating off during the game.

Part three ended with the students writing letters and articles about what they have learned about Mars and how they can encourage colonization of the planet.

When the group arrived at the Challenger Center it watched a short introductory video and then students received their assignments. After being fit with a hard hat and data collection sheets, students visited 18 pods, each with a different activity. The class favorite was the momentum machine. The kids had to hold on as they went spinning and realized their distance from the pole made a difference in their speed, just like a planet in orbit changes speed as it gets closer to the sun.

While at the center, they watched a video of a conversation among a coal miner, an astronaut, and students. They were amazed to see an astronaut so excited to see a coal mine and what was involved in the operation of a resource so common to eastern Kentucky.

The class learned the close connection that exists between the two very different careers. They realized the importance of safety and good communication. They also saw how necessary listening, team work and education are to being prepared for a career.