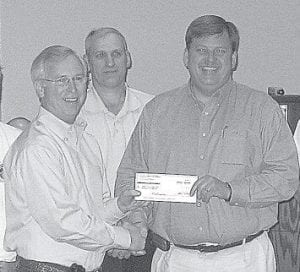 Maurice Royster, government relations manager for Equitable Resources, presented a check for $50,000 to the Letcher Fiscal Court at the court’s April meeting earlier this week. Royster wants the money spent on recreation and senior citizens.

A group of Fleming-Neon residents wants the Letcher Fiscal Court to take action that would help them keep their property clean of mud and dust generated by coal truck traffic from mining sites in McRoberts.

Fleming resident Wendell Hall appeared at the court’s April meeting on Monday to present the court with a petition asking for relief. Hall said many of the houses in the neighborhood are being destroyed by the mud and dust. He said the problem is so bad at some houses that residents have to remove mud from their porches with coal shovels.

Hall said he doesn’t want to stop the mines from producing coal, but thinks they should be able to haul their product without creating a public nuisance. Hall suggested that coal trucks use skirts to prevent mud from being thrown from their tires.

“There are a right way and a wrong way,” said Hall. “With a little effort, it can be done the right way. They’re removing gob piles (coal and rock left over from coal cleaning in earlier mines) and getting a 60 to 70 percent recovery rate, so there is no reason they can’t correct this. We’re not asking them to quit trucking but they could get a big power washer and clean the houses.”

District Five Magistrate Wayne Fleming, who represents the Fleming area and part of Neon, told Hall he has received complaints about black diesel exhaust being blown directly into people’s houses as well. One of the job sites is located in Number 2 Hollow and the other is in a hollow behind Barker’s Store.

Hall said mud and dust from the trucks is also getting into the Boone Fork Senior Citizens Center and that many of the clients there already have respiratory problems. Hall said a sweeper used by one of the companies just makes the dust worse.

In other business, the court was presented with a $50,000 donation from Equitable Resources. Maurice Royster, Equitable’s government relations manager, presented the check to the court and asked that it be used for Parks and Recreation and Senior Citizens programs in the county.

Royster told the court he is a veteran of Letcher County Fiscal Court meetings and recalled being present when Parks and Recreation Committee Chair Berma Matthews was first appointed as a volunteer board member. He also said he remembers Matthews’s first independent budget of $5,000.

Royster told The Mountain Eagle the gift is good for the county and good for Equitable as well. He said the company believes it is important to be a good corporate citizen.

“We try to always be good corporate citizens,” said Royster. “This was the right thing to do.”

Turner, whose 29th Senate District includes Letcher County, said that some of the money will be used as matching funds to secure larger grants that will make it go a good deal further. He said that during the conference committee, when the House and Senate iron out the differences in bills passed by both chambers, he was able to get an additional $1 million added to the county’s appropriation and that legislators in the House got an additional $1 million. Letcher County is represented by 94th District Representative Leslie Combs and 92nd District Representative Ancil Smith in the House of Representatives.

Judge/Executive Jim Ward reported that the amnesty period for delinquent garbage bills is now officially over and said the county will aggressively prosecute those who continue to defy the law and refuse to pay their bills. Ward said the amnesty was very successful and that over 500 people took advantage of the opportunity to settle outstanding bills without having to pay penalties and interest, but that is over now.

“We had a good response to the amnesty and sometimes collected between $5,000 and $7,000 a day,” said Ward. “But I just turned twenty names over to our litter wardens. After they make sure the bills are correct, the people will be notified that if they don’t pay, they will be taken to court. It’s unfair for some people to pay their bills when these folks don’t. If people don’t want to go to court, then they should come in and pay their bills.”

Jim Polly of the Old Jenkins High School Committee reported that the Jenkins City Council is still deciding whether it should accept ownership of the old school from the county. Polly said the committee is also still working on raising private funds and grants.

During last month’s court meeting several magistrates, led by Magistrate Banks, suggested that the committee or city should take over the old school project. County Attorney Harold Bolling said he had received opinions from the Governor’s Office for Local Development (GOLD) and the Attorney General’s Office which indicate the use of coal severance funds would probably prevent the county from giving the building to the committee.

Banks asked Polly if the committee might be open to adopting a different plan. Banks said it would still be possible to save the building but the business plan should be changed. Polly replied that the committee is working with Southeast Community College to develop a new business plan.

• In response to a request from Carcassonne Community Center Chair Dale Johnson, Judge Ward said that the Abandoned Mine Lands agency is currently conducting a study of the area for possible funding of water line extensions. Ward also told Johnson that a request for guardrails made last year by the court was used to put guardrails at other locations but said he will ask the Department of Transportation again.

• Ward told Letcher Fire Chief Gary Johnson he will work with the Campbell’s Branch Community Center board to help locate a branch fire station at the center.

• The court voted unanimously to accept an update in policy and procedures for the Letcher County Jail presented by Jailer Don McCall.

• The court unanimously passed the first reading of an ordinance which will allow it to recover costs involved in cleaning up hazardous materials from spill and other disasters.

• The court voted unanimously to accept a state grant for $19,200 from Governor Steve Beshear to be used for the development of ATV trails on county property located behind Fishpond Lake. Ward said the governor had written to him saying the project represented great possibilities for adventure tourism.

• The court voted unanimously to accept an Ambulance Service Block Grant from the Kentucky Board of Emergency Medical Services for $10,256. Ward said the grant will be divided equally between the county’s three ambulance services, Fleming-Neon, Letcher, and Cumberland River.

• The court accepted recommendations from the Letcher County Chamber of Commerce for the final seat on the tourism commission. The nominees were Shad Baker, Ked Sanders, Joel Beverly and Art Minus. Judge Ward appointed Ked Sanders of Jenkins to the board.

• The court voted unanimously to draft a letter of support for the Pike County Energy Development Plan.

• The court voted unanimously to amend the Flood Plain Ordinance to remain in compliance with federal regulations.

• Don Amburgey of the Little Shepherd Amphitheater reported that an Arts and Crafts weekend will be held on May 16 and 17.