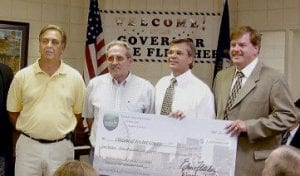 Gov. Ernie Fletcher presented the Letcher County Fiscal Court with a check for $1,009,000 to replace a one-lane bridge at Millstone which spans the North Fork of the Kentucky River on KY 805. Pictured from left are District Two Magistrates Archie Banks, District One Magistrate Bob Lewis, Fletcher and Judge/Executive Jim Ward.

The county received a check for $1,009,000 for replacement of the bridge over the North Fork of the Kentucky River at Millstone. The project has been a part of the state road plan for many years. The bridge project also includes a right turn lane off KY 2545.

“It is one of the worst bridges we have in this county as far as safety. There is a real narrow cliff right before you get to the bridge and I understand they are going to work on that too,” said Letcher County Judge/Executive Judge Jim Ward.

Construction could begin as early as the first of November and the project could be completed in approximately six months, according to Mary Holbrook, construction engineer with the Kentucky Transportation Cabinet District 12 office in Pikeville. 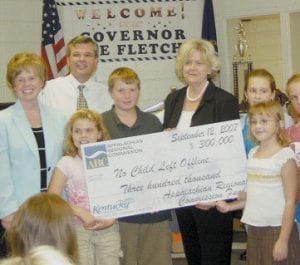 Gov. Ernie Fletcher presented a check for $300,000 in funding from the Appalachian Regional Commission for No Child Left Off-line, a program to provide refurbished computers and supplies to underprivileged children and their families. The money will be divided among several school districts in the areas in which the Appalachian Regional Commission serves. Pictured from left are Trisha Lawrence with ConnectKentucky, Gov. Fletcher, Letcher County Schools Superintendent Anna Craft and students from Letcher County.

A modular building used to house the Millstone Post Office was moved in February to make room for the new bridge, which will be located off KY 805.

“This replacement will mean greater safety and improve traffic flow. This is a little over a million dollars for that bridge,” said Fletcher.

Fletcher awarded $192,000 to the Letcher County Board of Education to build sidewalks to the West Whitesburg Elementary and Whitesburg Middle schools.

“The new sidewalks will link the schools with some nearby recreational facilities; the soccer fields, tennis courts, swimming pool and community theater,” said Gov. Fletcher.

The Safe Routes to School program is administered by the Kentucky Transportation Cabinet and is designed to make bicycling and walking to school a safer and healthier transportation alternative. Funding is provided for projects and activities that improve safety and reduce traffic, fuel consumption and air pollution near schools.

“There’s a lot of reasons we need to encourage folks to walk to school. Healthy habits are developed at a very young age. If we can encourage you to walk to school early on, were doing a good service for the rest of your life,” said Gov. Fletcher.

The sidewalk project corresponds with a project the City of Whitesburg is initiating to build a pedestrian bridge across the North Fork of the Kentucky River.

The City of Whitesburg received a check from Kentucky Transportation Secretary Bill Nighbert for $175,600 on July 27 for a pedestrian bridge which will connect the paid parking lot behind the courthouse to the free parking lot located next to the Veterans Memorial Park. The bridge, which will be moved from Whitco, will provide easier access to local businesses, the library, the courthouse and the health department.

The combined projects will connect the schools and recreational facilities to downtown Whitesburg.

Gov. Fletcher also announced $300,000 in funding from the Appalachian Regional Commission (ARC) for No Child Left Off-line, an initiative to provide refurbished computers and supplies to underprivileged children and their families. The check will be divided among several school districts in the areas served by the ARC, including Letcher County.

“What we found was that 50 percent of disadvantaged families said the primary reason they didn’t have access to the Internet was that they didn’t have a computer,” said Gov. Fletcher. “We don’t think any child should be left off-line, because it really is the integration of technology that makes us competitive locally.”