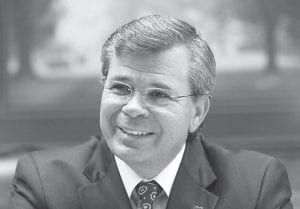 Gov. Ernie Fletcher responded to a question during an interview with The Associated Press in his office in Frankfort last week. Fletcher, who lost the governor’s race to Democrat Steve Beshear, leaves office this month after one term. (AP Photo/Ed Reinke)

Ernie Fletcher moved into the Governor’s Mansion four years ago with the type of impeccable resume from which political dreams are made.

Now, after a turbulent four years marked by scandal, Fletcher is preparing to end his term uncertain whether he’ll ever again run for public office. But he’s not ruling it out.

“You never say never, but I don’t have any intentions at this time,” Fletcher told The Associated Press in an interview last week at his office. “The people spoke rather clearly.”

For many politicians, adding the rank of governor to one’s credentials can be a springboard to higher office. Considering Fletcher’s curriculum vitae, being governor might have catapulted him to the U.S. Senate, some political experts say.

An ordained Baptist minister, Fletcher has also been a fighter pilot, engineer, medical doctor and congressman. He leaves office on Dec. 11, after having lost to Democrat Steve Beshear by 17 percentage points.

“I have the utmost respect for the public and they’ve expressed their opinion,” Fletcher said. “I don’t see me entering politics again at this time, at least as an elected official.”

It’s uncertain how history will look back on the Fletcher administration. No doubt, any account would surely include the state hiring investigation that dogged him through his term.

Attorney General Greg Stumbo’s office in 2005 began investigating allegations that Fletcher administration officials had circumvented state hiring laws by improperly giving protected state jobs to political supporters. Fletcher pardoned everyone in his administration except himself for any possible charges stemming from the probe. He was eventually indicted on three misdemeanor charges that were later dropped in a deal with prosecutors.

But Fletcher faced other stumbling blocks along the way.

During the campaign, Fletcher was forced to drop Hunter Bates as his running mate because Bates did not meet residency requirements. Instead, Fletcher tabbed former U.S. Attorney

soured and Pence split with the governor, choosing not to be his running mate in the reelection campaign and backing one of his Republican primary opponents.

Shortly after Fletcher took office, a health insurance plan for state employees brought teachers and public school employees to the brink of strike. Fletcher eventually called the General Assembly into a special session to craft a solution.

En route via a state airplane to President Reagan’s funeral in Washington D.C., Fletcher infamously flew into restricted airspace and caused the evacuation of the U.S. Capitol. The incident, caused partially by a malfunctioning transponder, made Kentucky the target of some latenight ridicule.

The governor also damaged his reputation among labor proponents by backing a plan to open Kentucky’s union workplaces to nonunion employees. Organized labor turned out for massive protests at the Capitol over the matter and eventually weighed in on Fletcher’s loss to Beshear.

Nevertheless, Fletcher says he had some real successes that might not be recognized for some time. For example, Fletcher’s administration branded the state with a slick marketing slogan, “Unbridled Spirit.”

Fletcher also points to his administration’s work in other areas, such as building roads and other infrastructure, tourism and overhauling the state’s Medicaid system. He also rattles off other accomplishments, such as landing a Toyota hybrid production plant, overhauling the state’s tax code and just this summer pushing for an energy bill aimed at luring a high-tech coal plant.

Some of his accomplishments might not be realized for a decade or more, Fletcher said.

But it was the “merit fiasco,” as Fletcher refers to it, that proved to be insurmountable in the campaign against Beshear, he said.

“When all the dust settles and the politics are swept aside, I think people will see that we really changed the culture here,” Fletcher said. “No one ever knows what your legacy is going to be because you don’t know what is going to evolve in history. A lot of it is going to depend on what happens with the next administration.”

Other politicians, such as Richard Nixon, were able to eventually overhaul their image, Lasley said.

Former Kentucky Gov. Julian Carroll, who served from 1974- 1979, made a political comeback in 2004 years after his term ended under the cloud of a federal grand jury investigation. Carroll was cleared of any wrongdoing, but one member of his administration ended up serving prison time. Carroll is now a state senator.

Because governors have statewide name recognition and fundraising know-how, they are usually considered strong candidates for higher office, Lasley said. Fletcher would have likely “been in the mix” for running for the U.S. Senate in 2010, depending on U.S. Sen. Jim Bunning’s plans, Lasley said.

Bunning has said he’s planning to run for re-election.

Fletcher, if he were inclined, could probably rehabilitate his image for a future run by focusing on substantive work.

Pence, who is returning to the private sector to be an attorney, said he thought Fletcher was “very possibly” on a path for higher office had the investigation not occurred.

“Governor Fletcher is a good man; he is not a bad man,” Pence said. “He is very smart, but he is subject to the same foibles and temptations of every person.”

Brett Hall, a former Fletcher spokesman, said the departing governor likely wouldn’t seek another run in the near future, if at all. There are still people who believe in him, and Fletcher knows how to raise money, Hall said.

“Politics is a funny business. You can be down one day and then bounce right up the next,” Hall said. “If he’s interested, and he plays his cards right, he can have a future.”